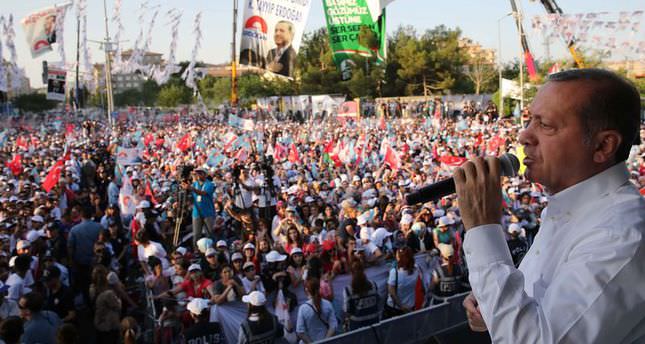 by AA
Jul 26, 2014 12:00 am
World's Muslims have been observing a sad Ramadan with Israel perpetrating genocide in Gaza, Turkish Prime Minister and presidential candidate Recep Tayyip Erdogan said Saturday.
"As we always say, eventually the right will prevail and the oppressor will go to hell," Recep Tayyip Erdogan told an election rally in the southeastern city of Diyarbakir.
"Each of us will be praying for the safety and well being of our oppressed brothers in Palestine, Syria, Iraq, Libya and elsewhere in the world on the occasion of Eid Al-Fitr," he said.
At least 1000 Palestinians have been killed – mostly civilians – and more than 5900 others injured in Israel's offensive, now in its third week.
Regarding Turkey's "solution process" to end terrorism in the country, Erdogan vowed to complete the initiative properly.
Erdogan said the success of the solution process would mean the triumph of the mothers crying for their children abducted by the terrorist organization PKK.
The success of the solution process will bring prosperity to the region and strengthen cohesion within the society, he added.
Turkey's 'solution process' began early last year with a ceasefire between the Turkish government and the PKK. The government pledged democratic reforms to empower minorities, particularly the Kurdish people -- by far the largest minority representing 18 percent of the population.
Last Update: Jul 26, 2014 11:10 pm