Turkey only country to speak out against Israeli aggression, says Chomsky 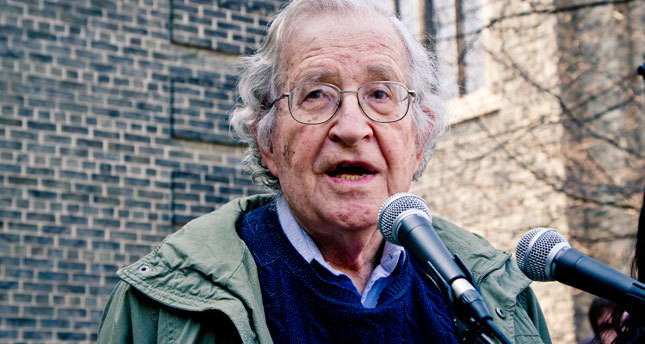 The world renowned U.S. intellectual Noam Chomsky said that Turkey is the only country who explicitly opposes Israel's atrocious operations in Gaza and continuous U.S. support of Israel has created anti-Americanism in Muslims around the world. "Turkey is the only country that has explicitly displayed its stern attitude toward Israel and has opposed Israel's oppression of Palestine," Chomsky told state-run Anadolu Agency.

Chomsky condemned the world, including the U.S and the U.N., emphasizing that they had elided the fact that Israel was committing a crime in Palestine and instead, were supporting Israel's strikes. He added that the Arab world was divided and powerless to have any impact at all. "Today, the world only acts in accordance with its national- interest. The U.S. supports Israel in accordance with its strategic interests in the region. In addition, the U.N doesn't really care about what is happening in Gaza. The Arab world is deeply divided and is powerless," said Chomsky. "The U.S is openly supporting Israel's actions militarily, diplomatically, ideologically, thus, is clearly a part of the killing of Palestinians. The U.S. should be accountable for the shed of Palestinian blood," Chomsky said.

He also said that the actions of the U.S. betrayed Muslims for yet another time, and that the U.S.' hypocritical behavior would lead to the faith of the Muslim world in the U.S. to deteriorate even further. "I don't know how the U.S. will ever be able to say it is interested in developing a dialogue with the Muslim world again, after this betrayal. This really is hypocrisy,"

Chomsky said. "The U.N is not taking any notable measures to end the crisis in Gaza. The U.N needs to unite and show courage against the U.S.' politics. Besides, apart from a few remarks they have made upon the crisis, they don't really care about Gaza. France has showed its stance as it banned protests condemning Israel. People are expecting too much from the U.N. in terms of it stopping the siege on Gaza, as the U.N. is not independent from world politics," he continued, reiterating that Turkey was the only country to bluntly condemn Israel for its bloody operations in Gaza.