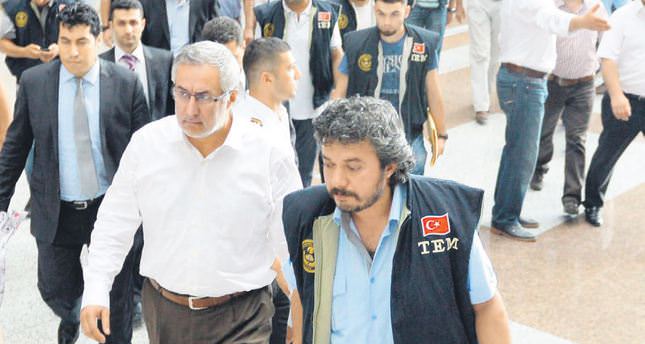 With the arrest of 11 more police officers, the Turkish government has dealt a serious blow to the Gülen Movement, which is accused of infiltrating state institutions to gain control of state mechanisms

An Istanbul court has ruled to imprison 11 officers linked with the Gülen Movement, led by U.S.-based imam Fethullah Gülen, for alleged espionage activities, raising the number of officers formally detained for illegal wiretaps to 31. The movement, which is accused of harming national security by wiretapping prominent figures, including top statesmen, has continuously denied its connection with the officers who are accused of illegal wiretapping. However, many members of the movement were present while Istanbul's courthouse in the Çağlayan neighborhood held a hearing on Tuesday night. The defendants' lawyers tried all possible ways to stall the case, such as attending court sessions late, telling their clients to not talk about espionage charges and shift the subject when the judge asked questions about claims of espionage. Analysts and experts on the movement said that the motive behind these plans was to change the judge overseeing the case. However, after long questioning sessions, caused by defendants refusing to answer Judge İslam Çiçek's questions, Çiçek gave his decision based on the evidence submitted by the prosecutor investigating the case.

The arrested officers include Yurt Atayun, former chief of Istanbul's anti-terror police department. Turkish media reported that police officers, including Atayun, who protested when they were handcuffed, had received special instructions from chief officer Abdüllatif Tapkan, the movement's "imam" within the police force, to create the impression that the police officers are innocent and are being victimized. All of the officers who were arrested have adopted the same defense, claiming, "The thieves are free while we're being arrested." It was also reported that one of the officers had requested to be handcuffed behind his back to make it look like he was a victim.

Answering questions on the arrest of Gülen-linked Ali Fuat Yılmazer, the former director of the Istanbul Police Department's Intelligence Unit, Prime Minister Recep Tayyip Erdoğan said: "There were some suspicions about him [Yılmazer] back then, but they were not that serious. Right now he puts on a show with his handcuffs. He is involved in every illegal affair of the Gülen Movement's Istanbul wing." "İlker Başbuğ, former chief of general staff, made an important remark when he was still on duty. He warned me about the Gülen Movement and said that what happened to us today may happen to you tomorrow," Erdoğan added.

Furthermore, 40 police officials allegedly having ties to the Gülen Movement have recently been dismissed based on a decision by the Interior Ministry's Supreme Disciplinary Board after the Dec. 17 attempt to topple the government. According to reports, the largest number of dismissals took place in Mersin with 20 police officials, including Ali İhsan Kaya, the former director of intelligence.

According to reports, officers affiliated with the movement wiretapped and issued arrest warrants for 251 people, including Prime Minister Erdoğan,
National Intelligence Organization (MİT) head Hakan Fidan, many members of Parliament and the cabinet, for being members of the imaginary Tawhid-Salam terrorist organization.

The prosecutor's office previously ruled there was a "lack of grounds for legal action" and dismissed the charges against all 251 people.
Turkish media have reported that Gülenist prosecutors and judges, who were involved in illegal activities, including coup attempts against the elected government on Dec. 17 and 25, will be the first targets of upcoming operations.

Gülen, who currently lives in the U.S. in self-imposed exile, leads the Gülen Movement, which operates in hundreds of locations throughout the world via charter schools and other activities. Their activities have been subject to government scrutiny in Azerbaijan, Russia, Germany, the U.S. and other countries. They are currently accused of infiltrating Turkish state institutions to establish a "parallel state" that would pay allegiance to Gülen. The movement denies these claims and has radically changed its political stance since the government proposed closing prep schools in Turkey, which are mostly operated by the Gülen Movement. The movement is now allied with and supports the main opposition Republican People's Party (CHP), which previously persecuted the revered Islamic scholar Said Nursi on whom Gülen claims to base his ideologies.

After 11 years in power which has seen his government tame the influence of the once-powerful military, Erdoğan has declared a war against Gülen, accusing him of running a "parallel structure" placed within the state. Erdoğan also accused the movement of being behind a series of recordings posted on the Internet suggesting the prime minister and his family members were engaged in corruption. The Scientific and Technological Research Council of Turkey issued a report on the recordings, stating that the tape recordings posted on social media platforms allegedly belonging to the prime minister and his family, were fabricated by electronically cutting and pasting different syllables from different speeches under a single pool of voice recordings.

In his first reaction to the raids, PM Erdoğan hinted that the anti-Gülen probe would widen. "We are currently watching. We will all see what will come out of this." Asked if the drive to purge Gülenists from the state apparatus would be expanded, he replied "It looks like it, of course, of course."
In a television interview last week, Erdoğan vowed bitterly that the fight against the Gülen Movement would continue "nonstop" while calling on the United States to extradite the self-exiled imam from his base in Pennsylvania. "I expect the U.S. to take a stance on the Gülen issue," Erdoğan said.
Last Update: Jul 31, 2014 1:22 am
RELATED TOPICS