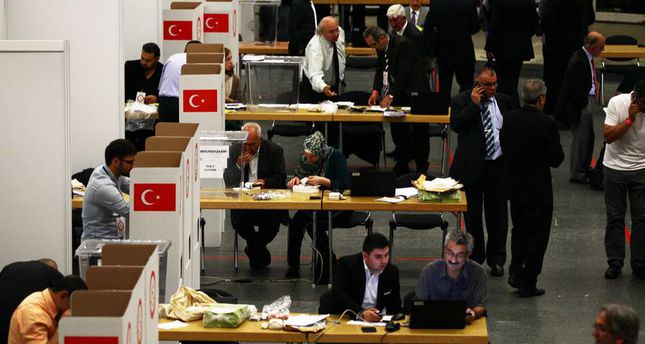 Speaking to Anadolu Agency (AA), the Ankara ambassador to Melbourne and the head of the Melbourne electoral commission Seyit Apak stated that the voting process in Melbourne for the presidential election is historical for Turkish citizens residing abroad.

"We [Turkish Embassy in Melbourne] finalized our preparation [for voting]. Turkish citizens started pouring in to cast their votes. We can see that there is a great interest, but we do not presume how many votes will be casted," added Apak.

Salih Arslan, who came from Western Australia's capital of Perth to Melbourne, noted that nearly 2,000 Turkish citizens living in Australia will not be able to vote due to the long distance between Perth and Melbourne. "This is a civic responsibility. We [Turks in Australia] came here to vote regardless of the financial bother and distance problem," said Arslan.

Another Turkish citizen in Australia, Tülay Orhan, said that she voted for the first time and expressed her hopes that the election is held democratically and equally. Turkish people living in Germany, a country that hosts nearly 3 million Turkish citizens and the country that hosts the world's largest Turkish expatriate community, also started casting ballots. It is estimated that there are nearly 1.4 million eligible Turkish voters residing in Germany where polling stations containing a total of 498 booths were arranged throughout Berlin's historic Olympic Stadium, other sports arenas and congress centers in six other cities.

In Holland, where nearly 240,000 Turkish citizens reside, two different polling stations were arranged in Rotterdam's Ahoy congress center and Deventer's De Scheg sports arena. It is reported that 63 booths in Rotterdam and 24 booths in Deventer were set up.

In Turkmenistan's capital Ashkhabad, two booths were arranged for Turkish citizens. The Ankara Ambassador to Ashkhabad Şevki Mütevellioğlu stated that 3,705 electors are registered to vote in the embassy for the upcoming presidential election. Mütevellioğlu further added that the embassy is expected to host around 900 voters per day during the Ashkhabad's voting process which is expected to continue for four days.

The 128,000 registered Turkish voters in Belgium started casting their votes in certain meeting centers and congress centers of Brussels. The Ankara Ambassador to Brussels Mehmet Hakan Olcay stated that July 31 [the day that voting abroad started] is a historical date for Turkish citizens residing abroad. "It is really important that Turks in Europe and Belgium can use their democratic rights and participate in democracy," added Olcay.

Also, Turkish citizens in China went to cast their votes in the three ballot boxes set up in Turkey's Beijing, Shanghai and Guangzhou Embassies.

According to the Supreme Election Board (YSK), Turkish citizens living abroad can vote on the day for which they made an appointment until Aug. 3. The YSK indicated that Turkish citizens in Germany, Belgium, France, Holland, Israel, Switzerland, Italy, Northern Cyprus, Lebanon, Norway, Romania, Saudi Arabia and Turkmenistan will vote in the first round of the election between July 31 and Aug. 3. Turks residing in Canada, Australia and Russia will vote between July 31 and Aug. 2, while Turkish citizens in Bulgaria and Kazakhstan will vote between Aug. 1 and Aug. 3. Turkish voters who are not able to vote on dates for which they made an appointment can also vote at custom gates until Aug. 10. Amendments regarding presidential elections introduced a new reform for Turkish citizens living abroad where previously, Turkish people who live abroad had to vote at Turkey's borders or airports, but the upcoming presidential election will be the first time Turkish expats can vote in the countries of their residence.

Members of the YSK say that 2.6 million voters are living abroad, including 1.5 million Turkish citizens in Germany and 85,000 in the U.S. This is approximately 5 percent of overall voters, which is around 50 million for the upcoming presidential elections, depending on voter turnout. According to previous figures, 7 percent of the 2.6 million Turkish citizens living abroad voted at Turkey's border, however, this percentage is expected to increase to 95-97 percent due to the latest amendment.

While the voting process for Turkish people living abroad began yesterday, expat citizens who are currently in Turkey started to cast their votes at customs gates on July 26. According to the YSK's electoral schedule, Turkish citizens living abroad but currently in Turkey can vote at the gates until the first round of the election is held on Aug. 10. If one of the candidates cannot receive an absolute majority of votes, voters will be able to cast their votes between Aug. 17 and Aug. 24 for the second round of the presidential election. Turks living abroad will be able to vote at one of the 42 customs stations, including land gates, airports and ports.