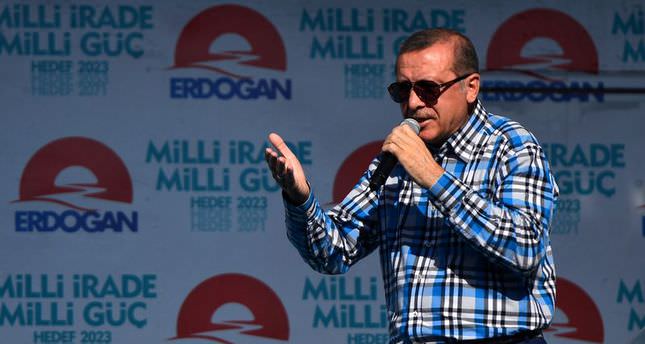 by AA Jul 31, 2014 12:00 am
Israel's perpetration of genocide against the Palestinians being carried out in Gaza is reminiscent of the Holocaust as Israel is acting with the same immorality as Adolf Hitler, Turkey's PM and presidential candidate Recep Tayyip Erdogan has declared.

Erdogan expressed his anger at a rally in the southeastern Turkish city of Van on Thursday, after the death toll from Israel's ongoing offensive in the Gaza Strip -- now in its fourth week -- reached 1,390 Palestinians, mostly civilians, according to the Palestinian Health Ministry in Gaza.

Erdogan said: "The children of Gaza could not celebrate Eid and were killed in a cowardly fashion by the Israeli state in schools, homes, mosques and anywhere they took shelter.

"The outcries of innocent Palestinian children -- which resounded throughout the skies and made angels cry -- killed by Israel will not remain unanswered."

"When Muslim children are being killed, the West deems it legal, but when we speak out against the terrorist state of Israel we are called anti-Semite. What kind of an injustice is that?" he asked.

The number of Palestinians wounded in the onslaught has exceeded 8,000 by Thursday afternoon, Palestinian Health Ministry spokesman Ashraf al-Qodra told the Anadolu Agency.

Israel's military operation, dubbed operation "Protective Edge," is the Jewish state's third major offensive against the densely-populated Gaza Strip -- which is home to 1.8 million Palestinians -- within the last six years.