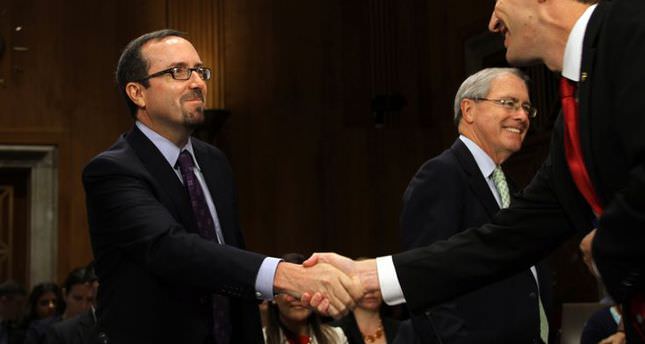 by Ragıp Soylu Jul 31, 2014 12:00 am
The Senate Foreign Relations Committee approved the nomination of John R. Bass, a career diplomat and former executive secretary of state, to be the new ambassador to Turkey in an unscheduled evening meeting on Tuesday.

Bass' nomination was cleared by the committee along with 12 other names, the Senate's Executive Agenda indicates. Congressional sources said that Bass' approval in the Senate would likely be left for after Congress' summer holiday, which starts Aug. 2 and lasts for a month.

Meanwhile the last possible blockage on Bass' nomination was removed on Monday after Republican Senator Ted Cruz lifted his hold on all the State Department nominees following his meeting with Federal Aviation Authority officials, which banned all U.S. flights to Israel for two days last week and drew furious reaction from the senator.

Still, there are some people who don't like Obama's choice for the American envoy in Ankara. The American National Committee of Armenia (ANCA), the official Armenian lobby on Capitol Hill, issued a statement regarding the nomination of Bass and said that his Senate testimony proves that he is retreating even further from the truth about the Armenian Genocide. "It is simply unacceptable. The United States must be represented in Ankara on April 24 of 2015 by a clear and compelling voice for truth," the statement read.

Currently the U.S. does not have ambassadors in more than a quarter of the countries in the world, according to a McClatchy article. Partisan divisiveness in the Senate has put Obama administration in a tough position in a time of major crises flaming up in the Middle East and Ukraine that require hard choices and constant attention.

Turkey's current ambassador, Francis Ricciardone, will retire next month and a quick replacement is a must, according to experts.

After minutes of intense congressional questioning, John Bass was forced to say that Turkey is drifting toward authoritarianism under Prime Minister Recep Tayyip Erdoğan. U.S. Senator John McCain put Bass under pressure at a Congressional hearing in Washington during a terse back and forth over Turkey's human rights record.

McCain grilled Bass for two minutes at the hearing beginning with the question: "Do you believe that many of the actions that [Erdoğan has] taken, suppressing social media, YouTube and Twitter, and restrictions on Internet freedom and independent media, is a drift toward authoritarianism?"

As Bass hesitated, McCain added, "You are putting your nomination in jeopardy by not answering the question." Bass deferred to answer the question for two minutes, as McCain remained insistent on a "yes" or "no" answer. Bass finally said, "It's a drift in that direction, yes, Senator."

"Thank you. It took 3 minutes and 25 seconds," McCain said in response to Bass, who eventually agreed with McCain's negative views of Erdoğan.

Bass served as U.S. ambassador to Georgia from 2009 to 2012 and is currently the executive secretary of state. He has worked on Turkey, Cyprus and NATO-Russia negotiations during his time with the U.S. State Department.