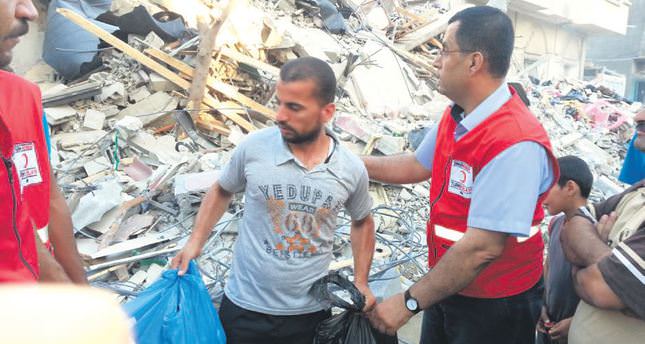 by Daily Sabah Jul 31, 2014 12:00 am
Nearly 20 tons of medical supplies to Gaza that were sent by the Turkish Red Crescent in collaboration with Turkey's Social Security Institution reached Gaza on Tuesday. Three shipments of supplies, including antibiotics, painkillers, and surgery requirements entered Gaza via the Karam Abu Salem crossing. It is reported that the supplies that reached Gaza were received by the Palestinian Red Crescent.

Speaking to Anadolu Agency (AA), Safaa Hawar, who is in charge of warehouses at the Palestinian Red Crescent noted, "We have received medicine supplies from the state of Turkey." Hawaar highlighted that there is an acute shortage of medical supplies in Gaza's hospitals and increasing demand which has been caused by Israeli aggression.

Amid the continuing Israeli aggression toward the Gazan people and airstrikes targeting infrastructure, schools, the U.N. shelter and civilian facilities, Turkey has been continuing to lend a helping hand to victims in Gaza. Turkey's initiative to transport injured Palestinians in Gaza to Turkey began last week.

Abdulrauf Gazi Mohammed, who was injured during Israeli strikes on Gaza, was transferred to Turkey for treatment by the Turkish Cooperation and Coordination Agency (TİKA), per the instructions of Turkish Prime Minister Recep Tayyip Erdoğan.

Taken to Turkey by Turkish Airlines, Mohammed was welcomed by TİKA head Serdar Çam. Speaking to journalists, Çam said that passports and visas for nearly 60 injured Gazans are needed to be processed before more of the injured can come. "We [Turkey] will try to take other injured people to Turkey as soon as possible. We took on this initiative to organize a humanitarian zone to take seriously ill people to Turkey and we held talks with several international humanitarian organizations, including the Turkish Red Crescent and Red Cross."

TİKA, based on orders from Prime Minister Erdoğan, has been currently distributing food and other humanitarian supplies. They distributed 15,000 food packages and 15,000 meals while water and sanitation projects as well as education, health care, orphanage and infrastructure projects are underway along with others to respond to the ongoing humanitarian crisis. Throughout the month of Ramadan, 15,000 fast-breaking meals were distributed by TİKA to the people who escaped their homes in the Shujaya, Tuffah, and Zeytun neighborhoods in Gaza due to indiscriminate Israeli attacks from the air, land and sea and took refuge in schools belonging to the U.N. Relief and Works Agency for Palestine Refugees.

According to reports by TİKA, the agency started to make contact with officials at TİKA's Gaza and Palestine office on July 9 to determine the situation following the Israeli air strikes that started on July 8. Accordingly, they said that the developments are constantly being watched while the agency's Gaza office is responsible for distributing food and humanitarian aid supplies. For instance, 15,000 families have received food packages containing basic necessities such as rice, sugar, flour, and oil in Rafah, Gaza and Khan Younis. Likewise, TİKA has delivered four generators to Gaza, which has been heavily struck by attacks in past years resulting in the destruction of most of its infrastructure.
Last Update: Jul 31, 2014 1:23 am
RELATED TOPICS