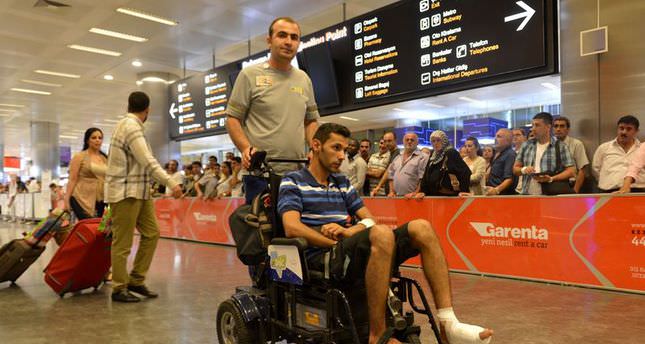 by AA Aug 01, 2014 12:00 am
A cameraman from Turkey's state-run Anadolu news agency (AA), who was wounded as he covered the Israeli bombardment of Gaza, was taken to a hospital in Istanbul on Friday.

The Turkish Cooperation and Coordination Agency (TİKA) transferred Enes Ebu Muaylik from Cairo on Friday to Istanbul for treatment on the instruction of Prime Minister Recep Tayyip Erdoğan.

Muaylik was injured in the stomach, back and foot and was initially treated at Shuhada Al-Aqsa Hospital in Deir al-Balah, which came under attack by Israeli warplanes. A doctor and four other hospital staff were killed.

He was ferried by ambulance to Arish, in northern Sinai, on Wednesday before being transferred to Cairo for treatment.

The journalist accused Israel of deliberately targeting the media and first aid teams.

"Journalists have increasingly become targets of Israeli attacks in Gaza. I was attacked when I was at the hospital for a feature story. Israel especially targets medical staff and journalists," he said.

A three-day truce came into effect in the Gaza Strip at 8:00 a.m. (5:00 GMT) upon a request from the United Nations to allow humanitarian aid into Gaza.

Stating the importance of the ceasefire, Muaylik said: "The silence of the world causes a disaster in Gaza. We have no one to support our resistance in Gaza. I hope the ceasefire will relieve the war-torn people."

A total of 1,458 Gazans have been killed and 8,375 others injured by Israel's attacks since the war on Gaza started on July 7. Fifty-six Israeli soldiers and three civilians have also been killed since hostilities began.

Israel and the Palestinians are to send negotiators to Cairo, Egypt, to discuss a long-term truce.