Turks in more than 50 countries vote for president 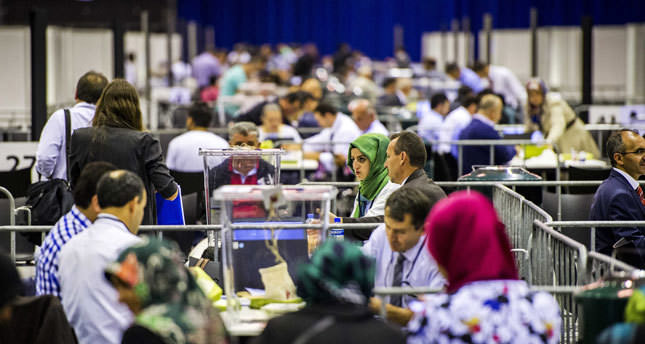 A total of 250,000 people out of Turkey's 2.7 million expat voters had registered to cast their ballot at embassies and consulates, according to Sadi Güven, the head of Turkey's High Election Board.

The August 10 election will be the first time Turks have voted directly for their president; the head-of-state was previously selected by members of parliament.

Polling for overseas Turks begun at Turkish border posts last Saturday and is expected to see an influx of Turkish citizens wanting to spend their holiday in their hometowns, with long queues being reported along Turkey's Bulgarian border last week.

In Australia, some Turkish citizens even flew 3,500 km from the western city of Perth to vote in Melbourne. Canberra and Sydney also hosted voting centers.

"This is a civic duty. I came to vote regardless of any difficulty [about] the cost or the distance," Salih Arslan, a Turkish resident from the capital of Western Australia, Perth, told the Anadolu Agency.

Turkey's Melbourne Consul General Seyit Apak said the voting arrangements had attracted "fair" attention but added that it was too early to tell how many would take advantage of the new system.

Three major cities in China -- Shanghai, Beijing and Guangzhou -- are also hosting polling stations, which will open for today only.

One of about 240,000 eligible Turkish voters in the Netherlands, Fatma Cimtay, said she was glad to be at the voting center in Rotterdam as it was 40 years since she last placed her ballot into a box in Turkey.

"I am really happy to embrace this right abroad," Cimtay told the AA.

Brussels also hosted one of two poll centers in Belgium for almost 130,000 eligible voters in a day, which ambassador Mehmet Hakan Olcay described as "historic," stressing it had been 50 years since the first group of Turkish expats came to the country.

Copenhagen, Denmark's capital, will be the center for 30,000 Turkish voters, including Cafer Bulut who told the AA that he had been unable to sleep because of the excitement of casting his first vote as he had been abroad since he was 16.

In Turkmenistan, where more than 3,700 people have made appointments to vote, Turkey's Ambassador in Ashgabat Sevki Mutevellioglu said he was expecting "major attention" with an estimated turnout of 900 people a day.

In countries with large Turkish populations, including several European and Middle Eastern nations, the U.S. and Turkmenistan, polling stations will be open for four days until August 3.

The dates will vary according to the size of Turkish population in a total of 54 countries.

Citizens who miss their opportunity in voting centers can vote in customs stations along Turkish borders until August 10.

Some presidential candidates have held rallies in several European countries to speak to potential voters, which make up nearly five percent of the whole electorate.