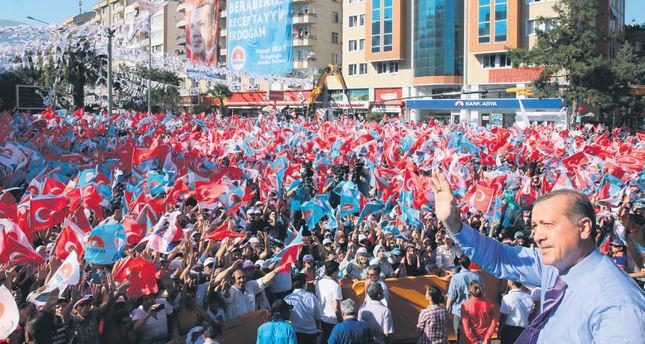 "May God remove the apathy of the Islamic world [regarding Israeli aggression]," noted the AK Party presidential candidate. Erdoğan pointed out that all oppressed civilians around the world seek Turkey's help. Highlighting that certain circles in Turkey get annoyed at the Turkish government's support for the Gazan people, Erdoğan stated that Turkey keeps extending its helping hands to all victims around the world.

Slamming the main opposition Republican People's Party (CHP) over its stance against Israeli aggression, Erdoğan said that the CHP sided with Hitler and Mussolini before, and now it took the side of Israel, which is repeating Hitler's atrocity. "They [CHP] do everything to cover the [Israeli] massacre in Gaza. They do their best in Turkey to give the upper hand to Israel," said Erdoğan.

During his political rally in the southeastern city of Mardin on Friday, Erdoğan denounced Western countries and reiterated that they continue to remain silent on the Israel-Palestine issue. Urging the world to take immediate action against the Israeli aggression in Gaza, Erdoğan said, "How long do world powers wait to act? Israel alleged, without shame, that they are defending themselves, yet what they do [in Gaza] is not self-defense, but genocide." In the eastern province of Van, Erdoğan on Friday dismissed Israel's claims of self-defense and accused the Israeli leadership of trying to legitimize immorality and injustice through false rhetoric.

"The Israeli genocide is reminiscent of Hitler's holocaust because Israel is acting with the same immorality as Hitler. They carry on Hitler's spirit," said Prime Minister Erdoğan in his political rally in Van yesterday where he lambasted the Israeli administration's aggression on Palestine. "Israel has sprayed bullets on Gazans, including women and children. Children [who were killed during the Israeli aggression] in Gaza did not even see Eid al-Fitr. They killed [children] in their homes, in parks and on beaches," said Erdoğan. He noted that the Israeli administration tries to legitimize injustice and immorality by alleging that Israel is acting in self-defense. Saying that some are disturbed when he describes Israel's actions as genocide against Palestine, Erdoğan stated that Turkey would never be a country that remains silent against tyrants.
Last Update: Aug 02, 2014 10:39 am
RELATED TOPICS