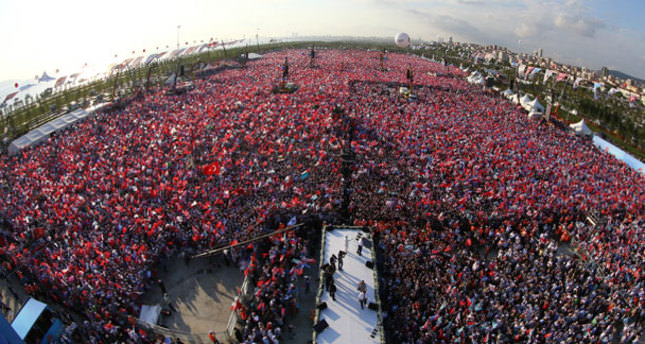 More than a million people gather in Maltepe, Istanbul for Erdogan's rally a week before the presidential election. Erdogan called for support and said he wanted to help build a confident, growing, peaceful and prosperous new Turkey

Erdogan was welcomed by Istanbulites in the last Istanbul rally of his 12-year service as Turkey's prime minister before addressing a huge crowd in Istanbul's Maltepe rally arena. Amid slogans and chants, "Turkey is proud of you," "President Erdogan," Erdogan began his speech with a recitation of the Turkish national anthem, word by word, in reference to Ihsanoglu, who failed last week to recognize Turkey's national anthem, written by the renowned poet Mehmet Akif Ersoy. Praising the unprecedented crowd at the arena, Erdogan said that what makes Turkey's friends proud and gives hope to the oppressed people around the world is the crowd at the arena.

Slamming Israel's aggression on Gaza, Erdogan said, " I am going to tell a truth that bothers Israel most: The Israeli genocide is reminiscent of Hitler's holocaust because Israel is acting with the same immorality as Hitler."

"We [Turkey] are here for you Gaza. We are here with your pain and anger. We are always with you Gaza. 100 years ago, we pulled back from Shujaya but we have not withdrawn our hearts from there." He said that Israel fears the wounded people in Gaza, the disabled people in wheelchairs and added that they will be drowned in the blood they shed. "Israel will pay the price of committing genocide. Palestine you are not alone. Gaza, you are not alone. Those who have a conscience are with Gaza. Today, Istanbul is with Gaza. All 81 cities of Turkey are with Gaza. All 77 million [of Turkey] are with you Gaza."

Calling on the West, Erdoğan said, "You raise your voice for imprisoned socalled journalists who are members of a terrorist organization. Why not speak out for the murdered journalists in Gaza?"

AK Party's presidential candidate added that all related governmental organizations are in Gaza now to extend helping hands for those who are in need in Gaza. It is also reported that political party representatives from Greece, Bulgaria, Macedonia and Kosovo arrived to the Maltepe arena to observe Erdoğan's presidential rally. On Sunday, the prime minister addressed residents in the northwestern city of Kocaeli ahead of his Istanbul presidential rally. During his speech, he said that the Turkish state and nation will embrace each other in the Aug. 10 election. "For the first time in this country's history, the Turkish president will be elected by popular vote.

The distance [between nation and state] will close on Aug. 10," he said. Erdoğan criticized the opposition Republican People's Party (CHP),

Erdoğan accused the CHP and MHP of being opposed to a new Turkey. "They already know that they are going to lose [in the Aug.10 presidential election]," he said, alleging that CHP leader Kemal Kılıçdaroğlu and MHP leader Devlet Bahçeli will regret announcing İhsanoğlu as their joint candidate. Speaking of the AK Party's 2023 "New Turkey" vision, Erdoğan said that the Turkish government will establish a "new Turkey" together with the support of the nation. He noted that the actors of "old Turkey" are annoyed with his vision for a new Turkey, which has been on the AK Party agenda since its establishment.

"If I get elected president, I will continue to introduce innovations and global projects to the country. We [the nation and state] will be united, we will be strong and we will be a country where brotherhood prevails. We will also establish a new Turkey together," pledged Erdoğan. Citing Turkey's developments over the last 12 years, Erdoğan said, "We [the AK Party] are opening the doors of a new Turkey. We will continue to carry Turkey one step further. The national income was around $230 billion [TL 491.3 billion] when we took office and it increased four-fold in the last 12 years, now it is around $830 billion." Erdoğan further urged Kocaeli residents to go to the ballot boxes and vote for the country's future.
Last Update: Aug 03, 2014 9:20 pm
RELATED TOPICS