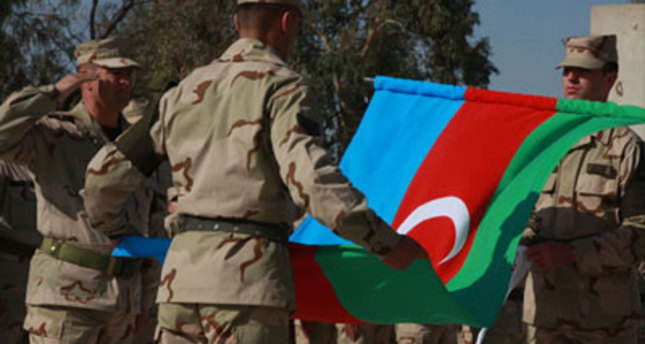 by Daily Sabah Aug 03, 2014 12:00 am
Following the deaths of 12 Azeri soldiers in a clash on the Armenian-Azeri border, the Turkish Foreign Ministry issued a written statement calling for an immediate resolution to the long-lasting Nagorno-Karabakh conflict.

The statement released over the weekend said that Turkey has been monitoring the recent border developments between Armenia and Azerbaijan with a deep concern.

"We [Turkey] offer our condolences to the martyrs' families and the nation of Azerbaijan," read the statement. "These incidents have revealed the urgent need for a resolution to the Nagorno-Karabakh issue, which set the biggest obstacle for peace, stability and cooperation in the Southern Caucasus."

It is also added that Turkey, as a neighboring country to the region and a member of the Minsk Group, will continue with determination its efforts for a full and comprehensive normalization in the region including the resolution of the Nagorno-Karabakh conflict.
Last week, Azerbaijan said it had lost 16 soldiers in three days of clashes with neighboring Armenia near the disputed Nagorno-Karabakh region in a dramatic spike in tensions in the long-simmering territorial conflict.

Azerbaijan's defense ministry said Armenian troops had ramped up their activity in the past few days and attacked Azeri positions. "Reconnaissance and sabotage groups of the Armenian armed forces attempted to break through the line of contact between the troops along the entire front line," the ministry said, adding that Armenian troops had been repelled. "As a result of clashes over the past three days, 16 Azeri troops have died," it said.

Meanwhile, another statement also issued by the Foreign Ministry regarding the reports on recent violence in the Xinjiang Uighur Autonomous Region. The statement said that Turkey calls on China to launch a transparent probe into the incident.

The ministry expressed its "deep concern" over the reports that scores of people were killed or wounded on July 28. The Turkish Foreign Ministry said that there were reports that the majority of the dead and wounded were Uighurs.

"We wish that peace and stability will prevail in the region. In this context, it is essential that the root causes of these incidents will be removed and that the cultural and religious rights of Uighurs will be guaranteed," the ministry said.