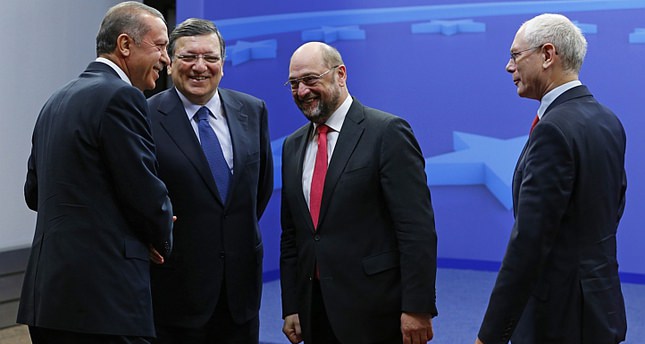 The highly contreversial Gülen Movement had used government funds to fuel defamantion campaigns against Turkey in Europe while its infiltrators in the judiciary and Police Department were attempting to overthrow the elected government, former MEP member claimed

Agents of the Gülen Movement throughout Europe have been accused of using funds provided by the Turkish government to lead a defamation campaign against Turkey's central administration and try to steer public opinion through the use of media organs and exploitation of European politicians.

In a recent interview with Turkey's Sabah newspaper, Ozan Ceyhun, a former member of the European Parliament (MEP), has made remarkable statements about the Gülen Movement's activities in Europe and how they conduct a series of designs to intervene in the governmental affairs of Turkey.

According to Ceyhun, who settled in Germany following the Sept. 12, 1980 coup in Turkey and who is actively involved in the politics of the German Social Democrat Party (SDP), has expressed that the Gülen Movement is involved in depicting a negative image of Turkey in Europe. He stated that the movement uses a European based TV channel funded by the Turkish government as a tool for their defamation campaign. The government has invested in the TV channel as a means to spread the use of Turkish language on TV channels in Europe but Gülenists have infiltrated the channel to impose and promote their own ideologies and have turned it into an anti-Erdoğan channel. "It is evident who these people work for," said Ceyhun, who stated that all of the agents have worked with the Gülen Movement and noted that it is crucial for the government to stop funding this channel and let them use their own resources to promote anti-Turkey sentiment.

Touching upon the implications of the Dec. 17 operation in Europe, Ceyhun stated that many throughout the continent have closely watched the Gülen Movement's attempts to bring down the government through a coup attempt orchestrated by the police and the judiciary. He noted that objective and unbiased European politicians and journalists recognize the fact that Dec. 17 was an undemocratic attempt at intervening in politics and acknowledge the importance of democratic elections.

On the other hand, Ceyhun also referred to those who unquestionably accept all news against the Turkish government and the interests of Turkey and stated that these people are largely affected by the media organs of the Gülen Movement and their lobbying activities in Europe.

Ceyhun stated that an overwhelming majority of Turkish people in Europe support Prime Minister Recep Tayyip Erdoğan and acknowledge the fact that Gülenists have tried to bring his government down. "The vision of a new Turkey is not only felt in Turkey but also in Europe," said Ceyhun, who explained that the Turkish people in Europe finally feel valued as their concerns are addressed by the government. Ceyhun states this is one of the main reasons why Erdoğan has a special place in the hearts and minds of Turkish expats in Europe. He argues that the movement has received significant backlash from Turks here, who pulled their children out of Gülenist schools, cancelled their subscriptions to Gülenist newspapers and cut funding under the name of charity. Ceyhun noted that some of these people have personally approached him and complained about the Gülen
Movement and their activities, while others have established new schools to provide an alternative to Gülen schools.

In response to a question about how some European parliamentarians make statements very similar to those conveyed by the Gülen Movement, Ceyhun stated that some of them work professionally as lobbyists. "The Gülen Movement makes professional contacts with these parliamentarians and uses their financial power to persuade these people and dictate the content of their statements," said Ceyhun, who also noted that the Gülenist agenda also works in favor of a number of people who are disturbed by the fast-paced development in Turkey and who see Turkey's growth as a threat to their current position. However, he expressed that such cooperation will not be long lasting as it will come to an end once all the schemes of the movement are revealed.

If a religious movement was to take over the government in Turkey through the appointment of thousands of members in top state positions and conduct secretive operations, Ceyhun stated that the German or any other European government would have reacted in a much more radical manner. "A prosecutor does not have the prerogative to threaten the prime minister," said Ceyhun, who stated that such acts were unacceptable in democracies.

On the other hand, he touched upon the statements of police officers who were arrested as part of the espionage case where over a hundred Gülenist officials were arrested for wiretapping thousands of people including politicians and journalists. He stated that their claims that they have not stolen anything are irrelevant, as the reason for their detainment was not theft but espionage and unlawful wiretapping, along with actus reus.

Referring to the Gülen Movement as a cancer- like disease, Ceyhun stated that Gülenists do not like their country or its people. He stated that recently the German Bild newspaper published defamatory statements against Muslims which received wide-ranging criticism and reactions from all Muslims throughout Europe, but Gülenist media organs in the continent have refused to write even a sentence about the matter for their potential gains in the future. He argued that the movement tries to portray itself as a liberal and democratic religious organization abroad but locally they attempt to block the government's democratic attempts such as the reconciliation process. "It is necessary that the government takes radical steps to fight this organization," said Ceyhun, who underlined the urgent need for an immediate response to deal with the Gülen Movement.

The Gülen Movement is led by the U.S.- based imam Fethullah Gülen, whose followers are accused of infiltrating state institutions to gain control of state mechanisms and illegal wiretapping, forgery of official documents and spying. Gülen is a controversial imam, living in rural Pennsylvania in self-imposed exile, who is at odds with the Turkish government over the influence he wields inside the Turkish police forces and top judiciary.
RELATED TOPICS