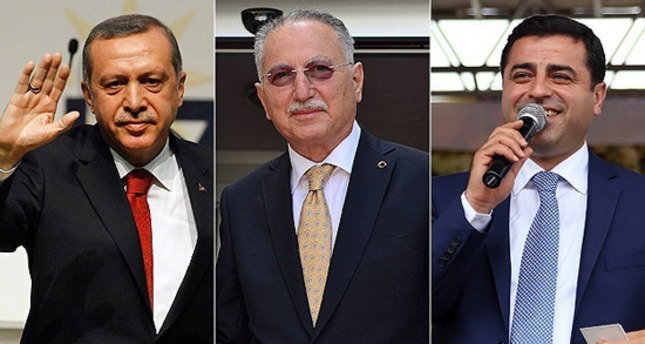 Speaking as the first presidential candidate, İhsanoğlu touched on economic developments and criticized the government's policies regarding Turkey's economics. He pledged that if he gets elected president, the priority will be to improve economic policies, rather than change the routine of the political landscape of the country. Noting that he did not want to be involved in politics before, İhsanoğlu said, "Even though I did not want be in politics, I have been in touch with politicians and state officials. I served the state."

He added that he worked with AK Party government officials, including Turkish President Abdullah Gül and Erdoğan during his time at the OIC to increase bilateral ties with Islamic countries. Dismissing Erdoğan's criticism against him regarding the Israel-Gaza conflict, İhsanoğlu stated that he worked for the sake of Gaza during his term in office. "My political ideology is clear. I am a nationalist, conservative and democrat. I grew up in a religious family. I also support [the founder of modern Turkish Republic] Atatürk's ideal to reach the level of contemporary civilizations."

Speaking after İhsanoğlu, Erdoğan reiterated that the AK Party government introduced the amendment to elect the president by a popular vote, but other parties in the Parliament raised their voices against the amendment along with non-political organizations to prevent the amendment. "Electing the president through a popular vote is not only a technical change, it also means strengthened democracy and healthy national will," said the AK Party presidential candidate.

Criticizing former presidents, Erdoğan said that previous presidents served as representatives of the status quo and as a blockage against the national will. The AK Party candidate added that the more the state embraces its citizens the more the state is just. "I served as Istanbul mayor for four and a half years. I served as the prime minister to the nation for 12 years. I worked for you [the nation], for my country and for my flag with my team for 12 years under every circumstance. We [AK Party] made significant reforms to solve Turkey's chronic problems, to boost its economy, to enhance its welfare, to strengthen its social peace and to gain an active foreign policy to the country."

Erdoğan continued, "For sure, we [Turkey] are the shining star of the world. We can be more powerful, we can be more influential. Aug. 10 will be a milestone for Turkey and it will be the birth of a new Turkey. If you elect me as the president, I will work more to take Turkey to a brighter future.
Now, it is your turn to decide. Now, it is your turn to elect the president."

Speaking as the last presidential candidate, Demirtaş started his speech with irony, criticizing the TRT for not giving him less time than other candidates. He said, "As you have closely followed ahead of the presidential election, I feel the excitement of reaching out to you through TRT, which presents an objective, equal, unbiased approach to candidates, especially to me."

Demirtaş said that the presidential election is a turning point in Turkey's political landscape and his candidacy aims to speak out on behalf of all oppressed, ignored individuals. "We [HDP] do not accept this process on the presidential election. Also, we evaluate this process as a step to rebuild our democratic and free future, and brotherhood." Demirtaş stressed that Turkey is too polarized to discuss the real issues that currently affect Turkey. "Our [HDP] objective is to pioneer democratic changes, especially in terms of a new constitution. My candidacy represents oppressed, marginalized citizens, who are looking for peace, justice and freedom," said Demirtaş.
Last Update: Aug 05, 2014 2:07 am
RELATED TOPICS