Erdoğan: New leader to be picked soon after election 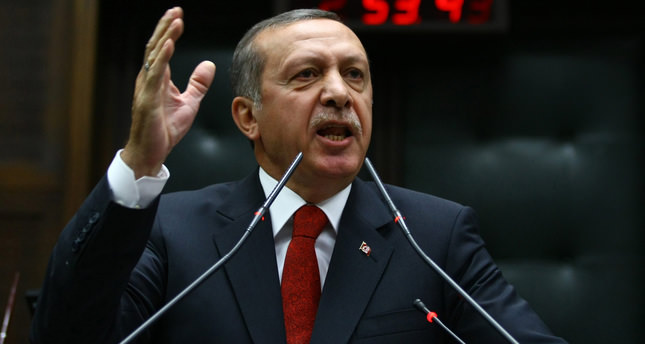 by Daily Sabah Aug 06, 2014 12:00 am
Turkish Prime Minister and Justice and Development Party's (AK Party) presidential candidate Recep Tayyip Erdoğan said Monday the AK Party's future will still be secure if he gets elected as the president. The first round of the presidential election will take place this Sunday, with a second round on Aug. 24 if necessary. Erdoğan said that the person who becomes prime minister would also be the AK Party's leader, and if the party leader and prime minister are not the same individual, it will cause a disturbance that could harm the party. Erdoğan said in a television program, which aired on Kanal 24, that the AK Party will elect a new party leader within 45 days if he wins the presidential election on Aug. 10. Erdoğan said, "I will never let the AK Party get harmed. I shared and continue to share what needs to be done to avoid any harm to the AK Party with my friends [AK Party members]. I will never let my party drown with my 40 years of political experience, just like a mother who will never let her son drown."

Commenting on the Gülen Movement, which is believed to have infiltrated police and judiciary with the goal of overthrowing the Turkish government during the Dec. 17 operation, Erdoğan said that the movement's coup plot dated back to the Feb. 7, 2012 operation against the Turkish National Intelligence Organization (MİT) chief Hakan Fidan, who held talks with the PKK for the reconciliation process between Ankara and the Kurds.

Erdoğan said the Gülen Movement threatened to take Fidan into custody, but the government took the necessary precautions to prevent it. He added that Fidan, as MİT chief, has the right to hold talks with the PKK in Oslo, but the movement's step to take him into custody had curious timing.
Denouncing the Gezi Park protests, the Dec. 17 and Dec. 25 operations as a coup attempt, Erdoğan said that the movement failed, but if they had managed, the U.S. based imam Fethullah Gülen, who has been in self-imposed exile, would have created a complete different atmosphere in Turkey than what it is today.

Erdoğan said that the Gülen Movement still tries to cause a stir, but it is in its death throes. He said, "If my nation elects me as president, I assure you that I will continue to combat the Gülen Movement and other movements threatening our national security. After observing what happened in the last two to three years, I can say that my nation does not deserve this, my nation should not pay the price."

Regarding the presidential system that is on the AK Party agenda, Erdoğan said that most developed countries have presidential systems and that Turkey needs to leap forward on this issue. Referring to the AK Party's three-term limit rule that prevents a politician from running for a fourth consecutive term, Erdoğan said that nearly 80 percent of parliamentarians support the continuation of the term limit rule because younger generations need to take over politics.
Last Update: Aug 06, 2014 8:48 am
RELATED TOPICS