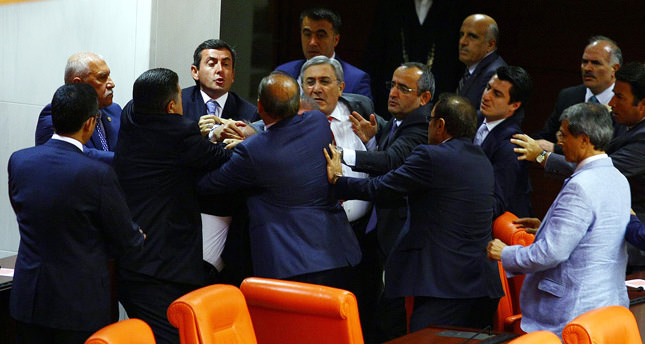 by Daily Sabah Aug 06, 2014 12:00 am
A brawl broke out in Parliament on Monday after the Nationalist Movement Party's (MHP) Iğdır deputy, Sinan Oğan, accused the government of not doing anything for Turkmens in Iraq. The Disaster and Emergency Management Presidency (AFAD) report on aid to the troubled Iraqi Turkmens in Erbil and Foreign Minister Ahmet Davutoğlu's statements after his meeting with Iraqi Turkmen leader, Arshad Salihi, were disproved by Oğan sparking the brawl.

MHP deputy Oğan criticized the government for its Iraq policy, and blamed the ruling AK Party for not including Turkmens in their agenda. The deputy also accused the government of practicing double standards such as not showing the same sensitivity towards Turkmens as they do to Gazans. "You are racist, you are fascist, this is a double standard," Oğan said, which escalated the already increased tension, and eventually turned into a brawl. Just after the brawl, Oğan insulted the AK Party deputies by describing them as dogs on his personal Twitter account, which drew strong criticism from the public.

Contrary to Oğan's accusations that the Turkish Government does not include Turkmens in their agenda, Foreign Minister Davutoğlu has recently met Iraqi Turkmen Front Leader, Arshad Salihi, and gave a strong message about how they embraced Turkmens in Iraq. After discussing the current conditions of Iraqi Turkmen, Davutoğlu and Salihi organized a joint press conference, in which Davutoğlu said, the "future and comfort of our Turkmen brethren is one of the priorities in our foreign policy making, it is always been like this and always will be." Davutoğlu also noted that they will willingly fulfill the needs of Turkmen regardless of the quality and quantity of their needs. "One can't find any Iraqi Turkmen that Turkey have hesitated to protect," said Foreign Minister Davutoğlu. Prime Minister Recep Tayyip Erdoğan also rejected the MHP's claims, stating, "We supplied every sort of humanitarian aid to our Turkmen brothers."

AFAD has recently started its efforts to establish a refugee camp for Turkmens in several locations in northern Iraq. These camps will temporarily provide a home for 20,000 people. Reportedly, 92 trucks carrying humanitarian aid reached the region under the umbrella of AFAD. According to the sources of AFAD, from June 12 to Aug. 5, 10,904 food packages, 12,500 tents, 10,000 blankets and 441,539 medicines in total have been provided to Turkmen people living in the camps.

Deputy Prime Minister Beşir Atalay has recently announced that Turkey was working hard to immediately respond to the needs of the Turkmen in Iraq, while adding that there are about 700,000 people who have fled from Mosul when the self-proclaimed Islamic State of Iraq and al-Sham (ISIS) took control of the region. "We have sent a significant amount of aid to Dohuk, where refugees are currently staying with food parcels containing food for 15,000 people, blankets for 10,000, along with 1,920 beds, 2,000 kitchen sets and 12,500 tents to establish refugee camps," he said.

ISIS currently poses a risk to Iraq's territorial integrity as it is attempting to take over oil-rich regions, and impose radical measures on the local population in Iraq in areas it controls. After the Iraqi Armed Forces retreated, no protection was left for the Shiite Turkmen, who are already marginalized, and do not have their own forces to provide protection.
RELATED TOPICS