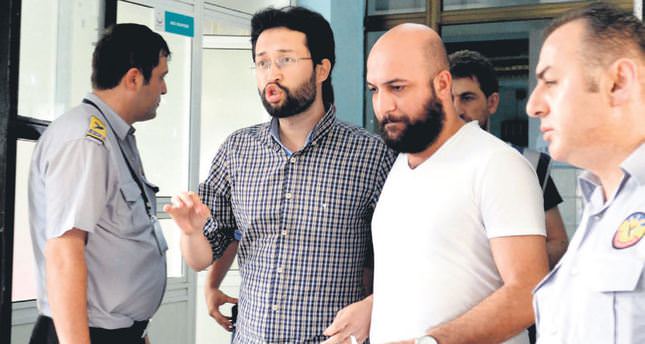 The investigation into the Gülenist efforts to infiltrate state institutions and spy on the government has broadened, with a court ordering the detention of 33 more police officers

Detention warrants have been issued for 33 police officers linked with the Gülen Movement - led by controversial U.S.-based imam Fethullah Gülen - in an operation launched by the Istanbul Police Department yesterday morning. Only 28 of the suspects were taken into custody when police units raided various locations in 14 different provinces across Turkey. The operation started with an early morning raid on a police lodging in Istanbul, but raids were also carried out in cities in the Kurdish-majority southeast including Diyarbakır. Television footage showed police being led away by plain-clothes officers from their residences but the names of those arrested were not immediately disclosed. Tuesday's operation followed the first wave of nationwide detentions in late July which saw a total of 31 police officers and chiefs arrested. Over 100 police officers were detained on July 22. Turkish news reports said that those arrested were less senior than those netted in the last raids on July 22, which included two former heads of the
anti-terror department in Istanbul.

In a curious development, an anonymous user on Twitter using an account @Fuatavni had leaked the plans for the raids on Monday evening, correctly predicting the numbers who would be arrested and where. His account was blocked by the authorities but the user appeared to have predicted this too, telling followers to follow him from another account.

It is also now being reported that the government's fight will turn to Gülenists in the judiciary, as well as prosecutors who ruled there was a "lack of grounds for legal action" in nine cases opened against Gülen. These prosecutors are accused of avoiding a detailed investigation into cases against Gülen. The operation will also target Istanbul's specially authorized prosecutors Sadrettin Sarıkaya and Bilal Bayraktar, who issued an arrest warrant for Hakan Fidan, the head of the National Intelligence Organization (MİT), accusing him of espionage and holding meetings with PKK leader Abdullah Öcalan and other PKK members.

Turkish government officials have continuously expressed their determination to continue to lawfully fight against the Gülen Movement, which is led by the U.S.-based imam Fethullah Gülen, whose followers are accused of infiltrating state institutions to gain control of state mechanisms and illegal wiretapping, forgery of official documents and spying. Fethullah Gülen, is a controversial imam living in rural Pennsylvania in self-imposed exile, who is at odds with the Turkish government wielding great influence inside the Turkish police forces and the top judiciary.

Gülen, who currently lives in the U.S. in self-imposed exile, leads the Gülen Movement, which operates in hundreds of locations throughout the world via charter schools and other activities. Their activities have been subject to government scrutiny in Azerbaijan, Russia, Germany, the U.S. and other countries.

They are currently accused of infiltrating Turkish state institutions to establish "a state within the state" that would pay allegiance to Gülen. The movement denies these claims and has radically changed its political stance since the government proposed closing prep schools in Turkey, which are mostly operated by the Gülen Movement.

After 11 years in power, which has seen his government tame the influence of the oncepowerful military, Erdoğan has declared a war against Gülen, accusing him of running a "parallel structure" placed within the state. Erdoğan also accused the movement of being behind a series of recordings posted on the Internet suggesting the prime minister and his family members were engaged in corruption.

The Scientific and Technological Research Council of Turkey issued a report on the recordings, stating that the tape recordings posted on social media platforms allegedly belonging to the prime minister and his family, were fabricated by electronically cutting and pasting different syllables from different speeches under a single pool of voice recordings.
Last Update: Aug 06, 2014 9:01 am
RELATED TOPICS