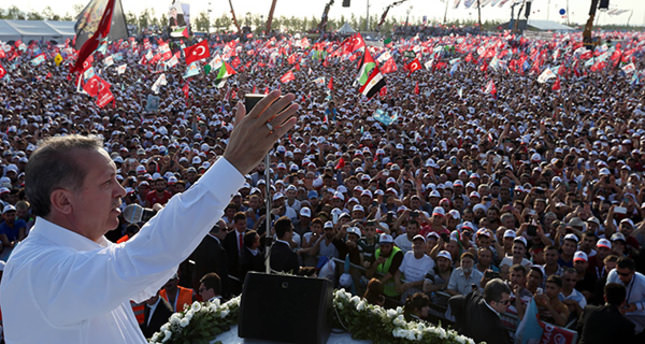 by Daily Sabah with Agencies Aug 06, 2014 12:00 am
Recep Tayyip Erdoğan's final campaign rally in Istanbul as prime minister before the presidential election saw an unprecedented crowd as he addressed over 2.4 million people, according to official figures.

The rally, described to be an event to send Erdoğan off to the presidential seat, was the largest he has ever held. Previously, his largest election rally was before the local elections in March in Yenikapı. The rally was held at a large public square in a park built by the ruling government along the coast of Maltepe in the suburbs of Istanbul. All means of public transportation including buses, subways, ferries, the Marmaray underground subway and other means were made available for people to reach the rally. Likewise, attendants received food and refreshments while there was a special health team to tend to the needs of those affected by the summer heat and the crowd. Erdoğan came to the rally by helicopter and greeted the crowd following a recitation of the Turkish national anthem.

Impassionedly addressing the cheerful crowd, Erdoğan criticized opponents for lacking the skills to meet the needs of the Turkish people while he praised the achievements of his government over the past 12 years. He said that he was there as the ordinary Recep Tayyip Erdoğan from Kasımpaşa, not Tayyip the prime minister or the presidential candidate. Referring to the difference between the "old Turkey" and "new Turkey," Erdoğan remarked that he "works for the interests of ordinary people whereas in the old Turkey the government was dominated by the secular elite and tutelage."

Numerous boats and yachts along the Maltepe shore supported Erdoğan's rally with cheers, waves and posters. The rally ground was colorfully decorated with various posters, many proclaiming 'Erdoğan is the strength of Turkey'. Many claim that the reason for Erdoğan's popularity among Turkish people is that he appeals to ordinary people who have long been ignored by Turkey's traditional political elite until he came to power in 2002.
Last Update: Aug 06, 2014 12:46 pm
RELATED TOPICS