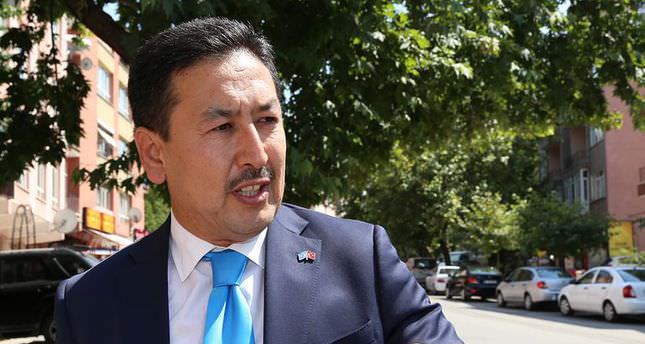 by AA Aug 06, 2014 12:00 am
The World Uyghur Congress has praised Turkey's call on China for a transparent investigation into recent reports of violence in Xinjiang's Uyghur Autonomous Region.

China revealed that 37 civilians were killed in a disturbance and another 13 injured after a mob attacked a police station and government offices on July 28.

However, a lack of independent monitors in the region has raised suspicions that the death toll could have been much higher, according to Seyit Tumturk, the vice president of the World Uyghur Congress.

"We welcome Turkey's call for a transparent investigation," Tumturk said referring to a statement released by the Turkish Foreign Ministry in which Turkey expressed "deep concern" over the recent reports of violence.

Turkey had also demanded that those accountable should face court.

Referring to Eastern Turkestan, which Uyghur separatists have used as another name for Xinjiang, or for a future independent state in the Xinjiang Uyghur Autonomous Region, Tumturk said, "We are relieved that Turkey has announced the Eastern Turkestan issue is under Turkey's responsibility."

"We appreciate the Turkish government. We hope Turkey's stance will set an example to Muslim world, the West, the U.N., the EU and the Organization of Islamic Cooperation (OIC)."

Tumturk also criticized Turkey's main opposition presidential candidate, Ekmelettin Ihsanoglu, who was the former president of the OIC, for not having done anything for Uyghur Turks.

The Uighurs are a Turkic-speaking Muslim ethnic minority group who constitute around 45 percent of the population of Xinjiang.

They have accused the Chinese government of human rights violations and discrimination.

The violence erupted on July 28 – the last day of Ramadan, during which the Chinese government banned government employees and children from fasting.

According to Xinhua, the Chinese state news agency, since the beginning of the holy month the "mob" had had many gatherings in remote places, during which time they made plans for attacks and prepared tools for violent acts.