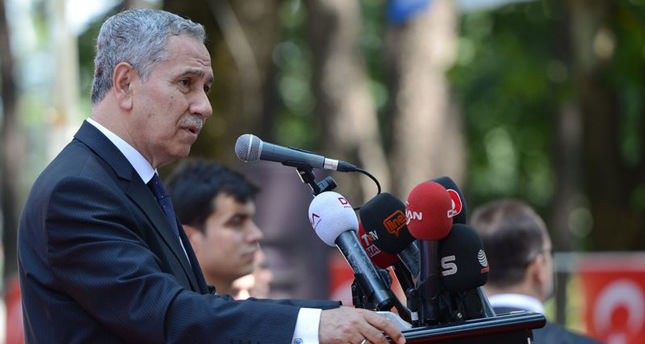 by Daily Sabah Aug 07, 2014 12:00 am
Turkish Deputy Prime Minister Bülent Arınç on Tuesday said that Turkish President Abdullah Gül is highly likely to be the prime minister and Justice and Development Party (AK Party) leader, if Turkish Prime Minister and AK Party presidential candidate Recep Tayyip Erdoğan is elected president after the Aug. 10 election. Saying that if Gül will not be the prime minister, there are other alternatives, Arınç, speaking on a TV program that aired on the Turkish channel Star said, "With his personality and success in presidency, Gül is a significant candidate. But if he does not take over the duty, this is not the end of the world. There are also friends [AK Party officials] who will work as much as Gül within the AK Party."

Arınç also gave the green light to the prime ministry for the transition period that will take place between the Aug. 10 election and the 2015 national elections if Erdoğan is elected president. "If you ask me what my response will be if the prime ministry duty for the transition period is offered to me, I can say that we can discuss this [amid AK Party officials]. I will say that there are other officials that can take this duty. But if they give me this duty, no one can reject it." Also, the deputy prime minister rejected claims that Gül may establish his own party and said, "Abdullah Gül will never engage in a move that will harm the AK Party as far as I know him."

On Monday, Erdoğan said the AK Party's future will still be secure if he gets elected president. The first round of the presidential election will take place this Sunday, with a second round on Aug. 24 if necessary. Erdoğan said that the person who becomes prime minister will also be the AK Party's leader, and if the party leader and prime minister are not the same individual, it will cause a disturbance that could harm the party. Erdoğan said in a television program, which aired on Kanal 24, that the AK Party will elect a new party leader within 45 days if he wins the election. He said, "I will never let the AK Party get harmed. I shared and continue to share what needs to be done to avoid any harm to the AK Party with my friends [AK Party members]. I will never let my party drown with my 40 years of political experience, just like a mother who will never let her child drown."
Last Update: Aug 07, 2014 3:43 pm
RELATED TOPICS