İhsanoğlu accuses candidates of being disrespectful 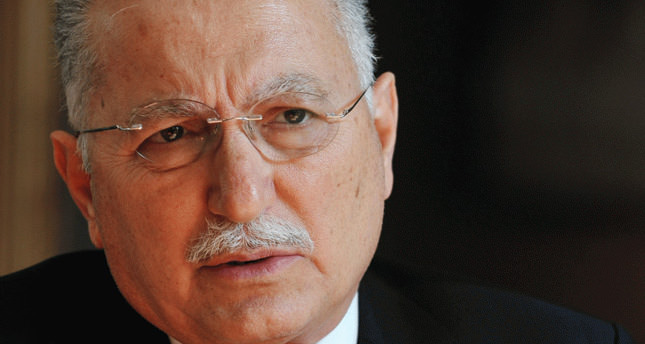 Republican People's Party (CHP) and Nationalist Movement Party (MHP) joint presidential candidate Ekmeleddin İhsanoğlu, who is the former secretary-general of the Organization of Islamic Cooperation (OIC), has criticized other candidates who will run in this Sunday's election for lacking respect and for having no conversation manners. If no candidate manages to receive more than half of the votes, a second round will
take place on Aug. 24 between two candidates with the highest number of votes.

Convening with Alevi foundation representatives in Istanbul yesterday, İhsanoğlu evaluated speeches by Prime Minister and Justice and Development Party (AK Party) presidential candidate Recep Tayyip Erdoğan and pro-Kurdish People's Democratic Party (HDP) presidential candidate Selahattin Demirtaş, who is a popular figure among Kurdish citizens, in their rallies. "They do not respect anything. They have no conversation manner. I have never seen such discourse in Turkish history; this is not the first time that Turkey goes into an election. Yes, this is the first time that the president is elected by a popular vote, but it is an election ultimately." Referring to the Muslims' holy book, the Quran, İhsanoğlu stated that such discourse has no place in Islam.

Touching on his talks with Alevi foundation representatives, İhsanoğlu noted that he and the representatives are in agreement on many issues, including respect for rights and freedoms and the right to live. "I believe that the Turkish president should not discriminate [against] all 76 million Turkish citizens on the grounds of religion, belief, race, nation, language and gender. He should accept them as Turkish citizens and should treat [them] equally." The joint candidate noted that the Republic's integrity should be protected; otherwise, certain circles will direct Turkey into a huge darkness by polarizing and marginalizing the entire country. İhsanoğlu added that he and Alevi representatives are in agreement to protect Turkey against any polarizing threat.