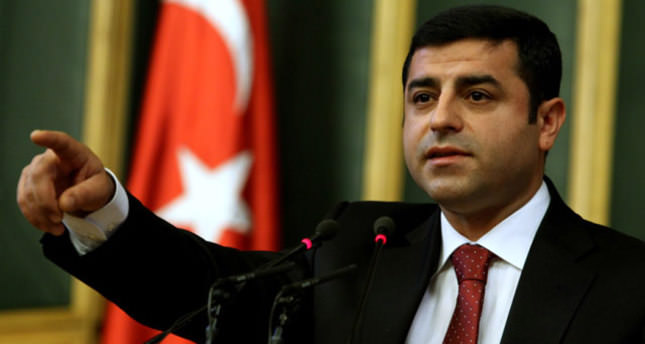 by Daily Sabah Aug 07, 2014 12:00 am
Pro-Kurdish People's Democratic Party (HDP) presidential candidate Selahattin Demirtaş, who is a popular political figure among citizens of Kurdish origin, said at a rally in the eastern city of Van, "The reconciliation process should not be sabotaged. Everyone should serve Turkey's brotherhood and unity," he said, highlighting the huge expectation surrounding the reconciliation process initiated by the ruling Justice and Development Party (AK Party) government.

Demirtaş also criticized the government's policies regarding the reconciliation process and asserted that the government is trying to stall the talks.
He said: "The government's stalling policies should not be taken into consideration much. This is not only Turkish or Kurdish citizens' expectation, but also the expectation of all oppressed, othered and distressed citizens. Democracy is not an expectation that can easily be postponed to another term. I hope the Turkish government passes the expected laws concerning permanent peace as soon as possible."

Demirtaş added that the presidential election is a direct step that will influence the permanent peace and that even if other candidates win the election, the reconciliation process should not be destroyed. Criticizing the Republican People's Party (CHP) and Nationalist Movement Party (MHP) joint candidate and former Organization of Islamic Cooperation (OIC) Secretary-General Ekmeleddin İhsanoğlu, Demirtaş stated that İhsanoğlu has just come back to Turkey, and 13 parties that announced they will support him in the Aug. 10 election will not include any policy to defend the rights of people and laborers. "Most of those parties [supporting İhsanoğlu] have been involved in massacres in their history and blood on their hands. Now, they come and ask for the votes of those people [who are oppressed and exposed to violence]."

Urging citizens against any provocation that may erupt ahead of the Aug. 10 election, Demirtaş stated that citizens residing in Van should not fall into possible provocation traps.
Last Update: Aug 07, 2014 2:05 pm
RELATED TOPICS