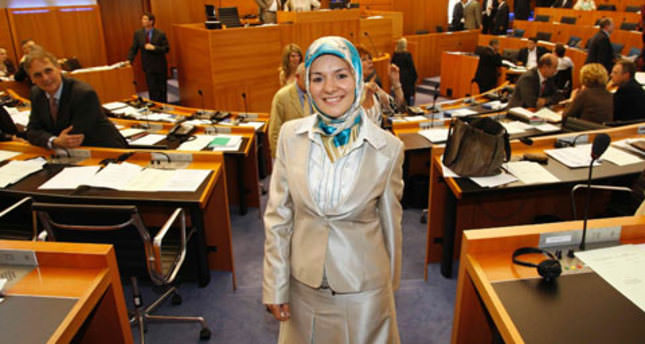 As Turkey is awaiting its first ever direct presidential election on Aug. 10, Turkish citizens living abroad have already cast their ballots, but participation figures have failed to meet the expectations due to technical inconveniences caused by Turkey's Supreme Election Board (YSK), especially in Europe, according to Mahinur Özdemir, a Christian Democratic and Flemish Party (CD&V) member of the Belgian Parliament.

In an interview with Daily Sabah, Özdemir who is of Turkish descent and the first parliamentarian in Belgium with a headscarf, representing the Brussels-Capital Region, has made marked statements regarding Turkey's presidential election in Europe regarding the low participation rate and the significance of the election for Turkish citizens living abroad, as it was the first time Turkish expats were able to cast votes in a Turkish election – before they had to come to Turkey and vote at customs gates, which was not a conventional option for the millions of Turks who live outside of Turkey.

According to official figures, there are about 3 million Turkish people who are eligible to vote and the government had predicted around 1.5 million of these people would cast votes. However, despite the predictions, only 240,000 eligible voters registered to get an appointment to vote at a designated voting station, to the disappointment of many politicians who thought expat Turks would be able to affect the outcome of the elections.

"Turkish people have long been waiting to cast their votes where they live and have always voiced this issue," said Özdemir, adding that the presidential election marked a milestone in Turkey's political history. However, she said that the election had greatly failed to meet the expectations of Turkish voters due to technical difficulties that prevented many from casting their vote. For instance, in Belgium only 6.8 percent of eligible voters casted their ballots. This number is even lower in other parts of the world where people live far away from the designated voting stations and diplomatic missions. "Other factors that had a negative impact on the number of people who cast their vote include the timing of the elections and the insufficient number of ballot boxes," said Özdemir, explaining that most people were on vacation while the number of voting stations was relatively low – Belgium had only two, similar to countries like Canada where people were only able to vote at consulates and embassies that are far from where the majority of people live. Özdemir said that the appointment-based system has caused trouble for many people who missed their appointment dates or were automatically removed from the system even though they have registered to pick a date. "This deterred many people from casting their votes," said Özdemir, who also pointed to the controversy surrounding votes cast at customs gates where many people were unjustly denied their right to vote based on the fact that their place of residency is not listed on the system.

Alternative methods could be adopted in the next presidential elections according to Özdemir, who remarked that the YSK could easily overcome the complications by disregarding the appointment-based system to allow everybody to easily cast their votes while they could also consider using vote-by-mail or an electronic system to enable those from remote areas to fulfill their democratic duty as well as vote-by proxy to allow the bed-ridden and those physically unable to go to the ballot boxes to cast their votes.

People's expectations in Europe greatly vary Özdemir pointed, stating that many people had different motivations to participate in the elections. For instance, the Union of European Turkish Democrats has actively participated in the presidential elections and has encouraged people in Europe to cast their votes. Likewise for over a year, the Republican People's Party (CHP) and the Nationalist Movement Party (MHP) have also actively conducted campaigns here. On the other hand, People's Democratic Party (HDP) was not as active as other candidates and their candidate Selahattin Demirtaş did not campaign here. "Further research should be done to find out more information about Kurdish voters in Europe" Özdemir stated, also expressing the fact that the popularity, profiles and audience of all three candidates are quite different from each other.

YSK has particularly been criticized for implementing an inconvenient system for the electorates abroad who had to get an appointment time to cast their ballot and were strictly denied their right in cases where people missed their appointments. 232,586 ballots from 4,128 boxes have been successfully collected and sealed by officials according to Deputy Foreign Minister Naci Koru and have been brought to Turkey by two rented Turkish Airlines planes and diplomatic couriers. Koru has stated that the ministry has been working on the elections for two years while noting the voting procedures have been set by YSK. Likewise, he also pointed that the appointment system and the technological infrastructure of the elections have completely been handled by YSK and the board has refused to implement an appointment-free system despite the fact that the Ministry of Foreign Affairs has sent them a delegation in May and informed them of the fact that they would be able to implement an appointment-free system but the latter has refused to do so, causing trouble to thousands of electorates.