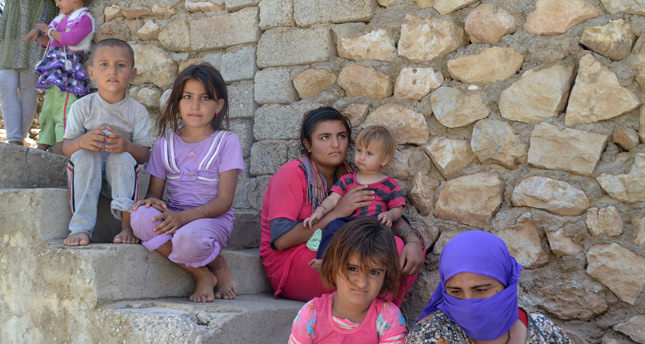 Up to 25,000 Yazidi children stranded in mountains bear the brunt of the ongoing ISIS-led violence in northern Iraq, suffering from worsening humanitarian conditions putting them under threat

Ever since the violent militants of the Islamic State of Iraq and al-Sham (ISIS) stormed the northern Iraqi town of Sinjar, tens of thousands of Yazidis have fled possible slaughter at the hands of the militants surrounding them, taking refuge on Mount Sinjar. At least 40,000 members of the Yazidi sect, many of whom are women, children and elderly, have been hiding in several locations on the mountain, becoming the victims of harsh conditions with some already dying of thirst. The death of 40 children of displaced families was reported as a direct consequence of violence, displacement and dehydration. Up to 25,000 Yazidi children have been in dire need of aid including drinking water, food and sanitation services.

"There are children dying on the mountain, on the roads," said Marzio Babille, the Iraq representative for the United Nations Children's Fund (UNICEF). "There is no water, there is no vegetation, and they are completely cut off and surrounded by [ISIS]. It's a disaster, a total disaster."
Some of the Yazidis trapped on the mountain have been rescued in the past 24 hours, a spokesman for the U.N. Office for the Coordination of Humanitarian Affairs told Reuters on Thursday. "We've just heard that people over the last 24 hours have been extracted and the U.N. is mobilizing resources to ensure that these people are assisted on arrival," the U.N. spokesman said.

UNICEF appealed for immediate help for Yazidi children and women who have been severely "affected by the continuing violence, displacement and fighting in [northern] Iraq." The U.N. agency also called on neighboring countries and the international community to provide life-saving assistance to prevent further loss of life and "to immediately grant children and women free and safe access to areas of refuge and respect the special protection afforded to children under international humanitarian and human rights law."

Sinjar, a district of Ninewa in northwest Iraq with a population of at least 150,000 children was captured by ISIS militants after heavy fighting with the Kurdish peshmerga forces on Sunday. Sinjar is a historic Yazidi area with an Arab minority, located between Mosul and the Syrian border. ISIS has been posing a greater threat for many Iraqi Kurds living in and around the northern provinces of the country. Since ISIS seized large swathes of territories in northern Iraq in June, the militants have been posing a great threat for Yazidi minorities as they have executed Yazidi men who refused to convert to Islam.

At least 130,000 Yazidi people have sought refuge in Dohuk, in the Kurdish north, and in Irbil, where regional authorities have been struggling to deal with one of the biggest refugee movements in decades. Since ISIS has launched its major offensive, the insurgents have overrun many areas in northern Iraq followed with a mass exodus to more secure places.

As ISIS draws closer to Irbil, 5,000 refugees were evacuated on Thursday from Hazer refugee camp in Irbil to be relocated in safer regions.
The fighting between Peshmerga forces and ISIS militants continued on Wednesday in the town of Makhmur, 67 kilometers south of Irbil.
The predominantly Kurdish residents fled northeast to Irbil despite the fact that Kurdish forces repelled the militants.

Witnesses stated that 100,000 Christians have been displaced due to ISIS's push in north Iraq as militants have set many places on fire, removed church crosses and burned manuscripts. "I now know that the towns of Qaraqosh, Tal Kayf, Bartella and Karamlesh have been emptied of their original population and are now under the control of the militants," Joseph Thomas, the Chaldean archbishop of Kirkuk and Sulaimaniyah, told AFP news agency.

As ISIS militants have been advancing to take control of more territories in northern Iraq, the deteriorating security has led to growing fears and uneasiness in the Kurdistan Regional Government (KRG). Prime Minister Nechervan Barzani has called on the Kurdish people to stay calm and continue to support peshmerga forces.
Last Update: Aug 08, 2014 10:38 am
RELATED TOPICS