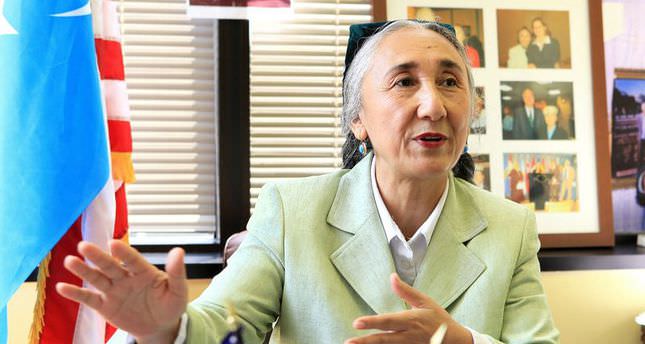 by AA Aug 08, 2014 12:00 am
A leading figure in the exiled Uyghur Chinese community has praised Turkey's championing of human rights in the region and called for abuses to be given the same prominence as those committed in Tibet.

Rebiya Khadeer, chairwoman of the World Uyghur Congress, praised Prime Minister Recep Tayyip Erdoğan as the first to refer to abuses in Xinjiang, the western Chinese province where Uyghurs form the majority, as "genocide."

Speaking at her office in Washington D.C. on Thursday, Khadeer told The Anadolu Agency: "We would tell the world that China has been committing genocide in the Uyghur region since the 1990s but no political figure gave voice to our cry except Prime Minister Erdoğan."

She thanked Erdoğan for his courage in speaking out against hundreds of deaths in July 2009 during riots in Urumqi. Official figures from the Chinese government claim 600 died but the congress puts the figure far higher and disputes the government claims that most of the casualties were Han Chinese.

Highlighting the international attention paid to China's human rights abuses in Tibet, Khadeer added: "We call on the U.S. and other civilized world powers to take a similar position for the Uyghur people's sufferings as well."

Uyghurs are a Turkic-speaking Muslim minority who make up 60 percent of the population of Xinjiang Autonomous Region. They have long protested at clampdowns on religious freedoms and the influx of ethnic Han migrants to the region.

Khadeer also praised the efforts of Ekmeleddin Ihsanoğlu, Erdoğan's main rival in Sunday's presidential elections in Turkey, for the work he did to help Uighurs when he was Secretary General of the Organization for Islamic Cooperation.

But she reserved most of her praise for the current government. "Before Erdoğan took the office, Uyghur Turkish flags were banned in Turkey," she said. "The former administrations would not even touch upon the Uyghur problem. Erdoğan lifted all bans on Uyghur symbols and flags and opened Turkey's gates to Uyghur refugees."

Khadeer – who held political office in China before her arrest in 1999 for sending documents to her husband in the U.S. – called for an international inquiry into the events of July 27, when, she claimed, Chinese security forces killed civilians.

She said: "Chinese forces attacked a place where Uyghur women were worshipping in Kashgar. People protested against this atrocity. Not a single media group could get to the region until China declared that 96 people have been killed, but the death toll was more than that."

Since her release from prison and move to America in 2005, Khadeer has been working to defend the rights of Uyghurs.

When President Xi Jinping came to power in 2012, she wrote a Washington Post article calling for a peaceful solution to the Uyghur issue. "Three days later, on the World Human Rights Day, the Chinese government executed three Uyghur youths without any judicial trial – a brutal answer to my call for peace," she said.

She added that last year, Uyghurs were regularly accused of terrorism offences for having knives or axes in their houses. Many attacks labelled terrorist attacks by the Chinese authorities in Xinjiang are carried out using bladed weapons.

Addressing the government's claim that it is fighting Uyghur terrorism, Khadeer said: "It is as in all countries across the world like Syria and Palestine, a fight for freedom."