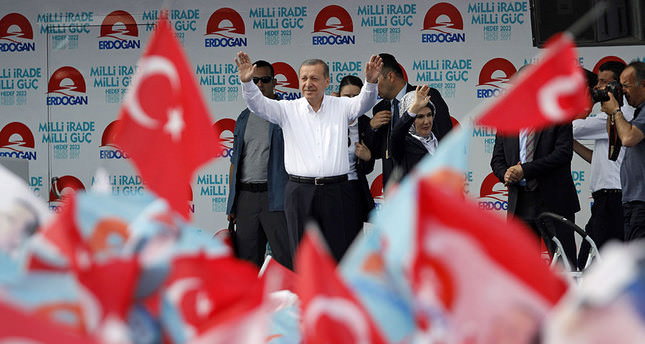 Turkish Prime Minister Recep Tayyip Erdogan, who will be Turkey's next president after first round, has climbed from a humble youth in Istanbul to become one of the most significant leaders in Turkish history

AK Party's presidential candidate and Turkey's Prime Minister Recep Tayyip Erdoğan won the first popular presidential elections in Turkey in its initial round receiving over 52 percent of the votes according to the Chairman of Turkey's Election Board (YSK).

"I stand here in Istanbul to send my gratitude, however I will give my formal speech in Ankara at 10pm" said Erdoğan during his first address to the nation following the presidential elections.

Erdoğan has significantly increased his support base as he received over 52 percent of the votes compared to 45.5 percent in the local elections while the overall of both İhsanoğlu and Selahattin Demirtaş's votes totalled to 46%. He has won the majority of votes in Istanbul and Ankara with over 52 percent, while he got 80 percent in Rize, his hometown located in the eastern part of the Black Sea Region. He received 66 percent of the votes in İhsanoğlu's hometown Yozgat, while İhsanoğlu received a mere 33 percent.

The opposition's joint candidate Ekmeleddin İhsanoğlu has widely been criticized by many for failing to meet the expectations of MHP and CHP's support base who have significantly differing ideologies.

While AK Party will be choosing a new leader to become the prime minister, Erdoğan's presidential vision aims to move Turkey forward with a series of new reforms under the framework of a New Turkey, putting a definite close to a chapter consisting of an authoritarian era, coups and human rights infringements. He also promises to make amendments in efforts to make sure that the president has a more active role in state affairs and can play a major role as the head of state.

Turkey's electoral commission is not expected to announce any official results until Monday.

After going to the polls with his family in Istanbul's Üskudar district on Sunday, Erdoğan said the Turkish nation was making a significant decision on its future with the election. "This decision bears a great importance for carrying Turkey to its future goals in 2023, 2053 and 2071, by means of the cooperation between an elected president and an elected government," Erdoğan said.

During the AK Party's 12-year rule under Erdoğan, the military tutelage had been brought to a level that makes it impossible for a military coup to reoccur while increasing political and cultural freedoms, as well as providing greater freedoms to Kurds, increasing their participation in active politics. "If I'm elected, I will not be an impartial president," Erdoğan said during the campaign. "There are two sides: the state and the nation. I will be on the side of the nation."

The election is being seen, as well, as a referendum on whether Turks want the country to move away from its parliamentary system toward a form of government with a more powerful president - something Erdogan has pledged to embody. "The election of the president by popular vote will be a manifestation of national will in Turkey," he said.

After 97 percent of the casted votes were counted, Erdoğan had receieved around 54 percent of the votes. At that time, he spoke to thousands of people at the Haliç Convention Center before departing for the capital Ankara. "Dear Istanbulites I'm here to thank you. I will now head to Ankara to make my main speech and hopefully the full results will be announced by the time we get there. At this moment, 97 percent of the votes are counted, we're now at the extra time of this race; God willing, the Supreme Election Board (YSK) will blow the final whistle. As long as we live, we will continue to work for our country. We will passionately work for the success of the reconciliation process. I thank you all, especcially our women and youth branch," Erdoğan said before leaving for Ankara.

After forming the ruling Justice and Development Party (AK Party) in 2002, Erdoğan has won eight national votes in a row: three parliamentary contests, three local elections and two constitutional referendums, including the 2007 poll that instituted direct elections to the presidency, previously decided by a parliamentary vote.

With family origins in the Black Sea province of Rize, Erdoğan is a father of four, and was born in Istanbul's Kasımpaşa neighborhood on Feb. 26, 1954. He graduated from the Istanbul Religious Vocational High School (İmam Hatip Lisesi) in 1973, and then graduated from Marmara University's Faculty of Economics and Commercial Sciences in 1981.

He played football as an amateur between 1969 and 1982. It was also in those years that Erdoğan began to take his first steps into politics. An active member of various branches of the Turkish National Students' Union in his high school and university years, in 1976, Recep Tayyip Erdoğan was elected chairman of the Beyoğlu Youth Branch of the National Salvation Party (MSP) - later to be elected chairman of the party's Istanbul Youth Branches in the same year.

When the Welfare Party (RP) was established after the military coup in the 1980s, Erdoğan returned to politics, and in 1984, he became the Beyoğlu district chairman of that party. Erdoğan was later elected as the Istanbul mayor in the March 27, 1994 local elections.

Erdoğan was sentenced to a term in prison because of a poem he recited on Dec. 12, 1997 during a public address in the province of Siirt in southeastern Turkey.

The poem was quoted from a book published by a state enterprise, and one that had been recommended to teachers by the Ministry of Education. It included verses which translate to, "The mosques are our barracks, the domes our helmets, the minarets our bayonets and the faithful our soldiers." Because of this conviction, Erdoğan was forced to resign from his post as mayor, and he completed his four-month sentence beginning July 24, 1999, with a temporary ban from politics.

He later established the AK Party with a group of friends on Aug. 14, 2001, and was subsequently elected founding chairman of AK Party by the founding board.

Parallel to this, inflation, which had adversely affected the country's economy and the people's psychological state-ofmind for decades, was finally taken under control, and the Turkish lira earned unprecedented prestige through the elimination of six zeros. Interest rates for public borrowing were brought down, and per capita income grew significantly.

A host of new dams, housing projects, schools, hospitals and power plants were inaugurated at a pace never before witnessed in the history of the country. All of these positive developments were named "the Silent Revolution" by some foreign observers and Western leaders.

After facing several coup attempts over the past two years, Erdoğan's AK Party received 45.5 percent of the votes in the March 30, 2014 general elections and on Sunday, with over 50 percent.

Retired general, elected by Parliament as the founding president of the Republic.

Former prime minister, elected by Parliament as president, toppled in the 1960 military coup.

Retired general, assumed the presidency and the post of prime minister after 1960 military coup.

Retired general, elected by Parliament as president in the postcoup
atmosphere of mid-1960s.

Retired admiral, elected by Parliament as president and oversaw the violent 1970s.

Leader of the 1980 coup as the chief of staff, elected president in a referendum for a new constitution.

Former prime minister who opened the economy in the post-coup environment, elected by Parliament.

Served as prime minister several times and toppled by coups twice. Elected by Parliament as president.

Former head of the Constitutional Court, elected by Parliament as president.