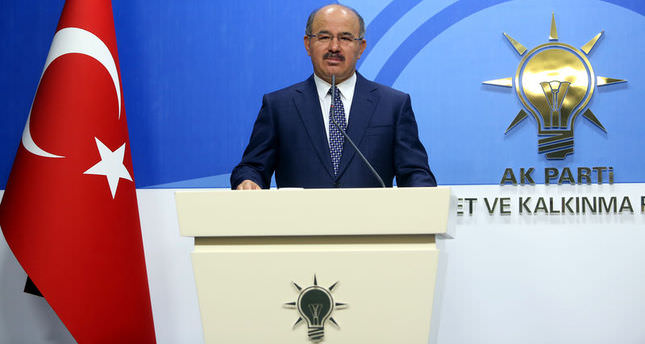 by Daily Sabah Aug 11, 2014 12:00 am
AK Party Spokesman Hüseyin Çelik announced, that the party would be choosing its new chairman, most probably the prime minister too on 27 August at the congress, during the first Central Decision-Making Administrative Council (MKYK) meeting after the presidential elections on Monday.

Çelik reiterated that Abdullah Gül was the president until he officially handed it over to Erdogan on 28 August.

Çelik said the new prime minister would also be the party leader as PM Erdoğan had previously stated many times. Turkish press outlets had reported that the next prime minister could be current Foreign Minister Ahmet Davutoğlu or former Minister of Transport, Maritime and Communication Binali Yıldırım. Çelik did not signal any names telling journalists that the PM will be chosen upon joint resolution.

Çelik also praised Abdullah Gül for his outstanding performance as president saying he was a president of the people who embraced everyone and visited all 81 cities, unlike his predecessors.

Abdullah Gül's presidency will end on 28 August as Recep Tayyip Erdoğan will become the 12th president of Turkey.