Davutoğlu: Conflict between the president and the next prime minister is out of the question 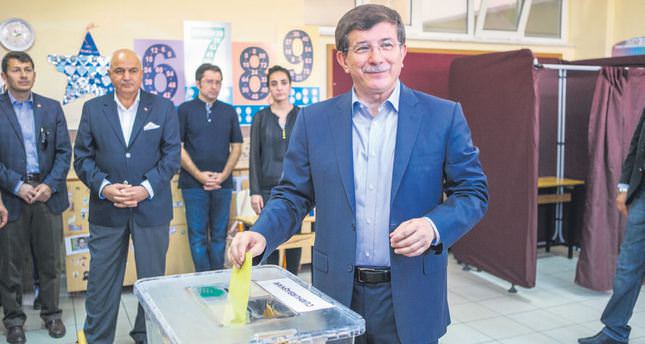 Foreign Minister Ahmet Davutoğlu, whose name is being mentioned for the prime minister's chair, guaranteed that a conflict between the next PM and the president will not be the case, and underlined the interaction between the two statesmen instead

Hours before the presidential election Foreign Minister Ahmet Davutoğlu hosted Ankara representatives of major news outlets in his house in the constituency of Konya to give remarks on the ISIS threat, an agenda regarding the AK Party's future and his possible nomination for the Prime Ministry.

Regarding criticisms from the opposition parties about foreign policy issues, Foreign Minister Ahmet Davutoğlu complained about being accused of engaging Turkey in a war and falling short of protecting Turkmens in Iraq. "I am accused of engaging Turkey in a war; however, Turkey's surroundings are already a battlefield. Turkey is maintaining its public order and we are not engaged in a war. This is an outstanding achievement," he said and added, "even though we are involved with Turkmens, we are asked why we don't provide sufficient protection to Turkmens."

About the critics of policies which seek to integrate with the northern part of Iraq he said, "Is it possible for the Republic of Turkey to say 'I can only get involved with Turkmens?' Aren't Yazidis, Christians and Arabs human beings? We are carrying out policies both to protect our kin, and steer clear of the war." Davutoğlu also pointed out the viltality necessary for giving full attention to the region: "However, there are times and places in which you will utilize this right with an ultimate care, such as situations regarding human lives and Turkey's strategic interests." The foreign minister also assured people about the safety of the hostages in Mosul.

Regarding the AK Party's future, he emphasized suffering but experience-giving incidents in the past and talked about the future of the party as promising. "We have gone through hard times; think about before the year 2007, the period between April and July was more challenging than this period. There were general elections, electronic notes, and plans about a coup. The AK Party survived through all of this unscathed. A political party which has gone through this and won two elections after will be able to overcome the current situation also. Regarding this, I don't think there will be much problem," said Davutoğlu.

About his name being mentioned for the prime minister's chair, he asked people to wait until the presidential election results had been announced and warned people about hesitations and disputes in order to prevent a division among the AK Party factions. "Hesitations are the utmost threat in any occasion. Any hesitations will result in confusion among the people. It is important to be concentrated. March 30 was an obstacle and it was overcome. Three day before this, the wiretapping incident in our ministry happened.

If we had focused on the question of what's next, this hesitation, this confusion, would have devastated us, not the wiretapping incident," he said. "We are the ruling party. We don't have the luxury to act like this. CHP can do it, because they don't have the responsibility of these problems and they don't possess the capacity to struggle to become the ruling party," stated Davutoğlu and noted, "Now, the Aug. 10 is upon us, and we will overcome this obstacle as well. The new obstacle after this will be about the distribution of roles, and this will be the responsibility of the new leader."

With respect to claims that a conflict between the president and the prime minister is possible, Davutoğlu guaranteed that this will not be the case and underlined the interaction between the two statesmen instead: "The psychological factors are important in this situation; communication, trust, shared vision, and loyalty between people will provide the most fundamental guarantee. If this is not realized, nothing can prevent a conflict, not even legal or constitutional preventions. Therefore, the relations between the prime minister and the president rely on interpersonal interactions."

Davutoğlu also stated that a constitutional reform is acquired to achieve the co-act between president and prime minister. He said: "the president and the prime minister elected due to votes received around the same political preferences will prevent conflict; it may even result in a joining of forces - a synergy. The chairman of the party and the prime minister should not be a separate person. Otherwise, the power will be fragmented between the two, and the current political system could not sustain the damage.
Last Update: Aug 11, 2014 1:31 am
RELATED TOPICS