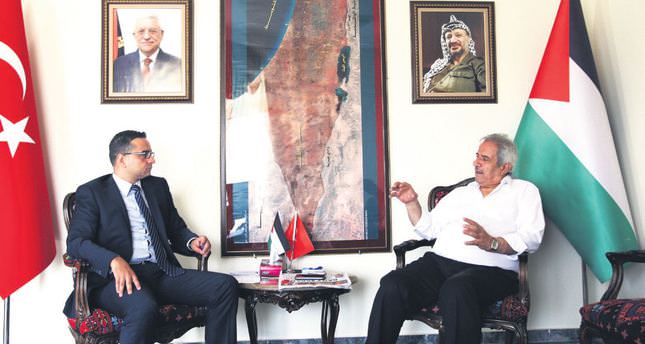 Speaking to Daily Sabah, the Palestinian Ambassador in Ankara, Nabil Maarouf, evaluated the latest development in the Middle East, and Turkey's role in providing humanitarian aid to the Gazan people

While Israeli bombardments resume in Gaza after a three-day ceasefire agreement, Palestinians still suffer under the arbitrary attacks. According to Gaza Health Ministry, the death toll is over 1,900, and almost 10,000 people have been wounded. Regarding the lapsed truce and ongoing clashes, a long-term peace settlement is still being debated with deep suspicions throughout. Nabil Maarouf, the Palestinian Ambassador in Ankara since 2006, responded to questions about the long-term peace, the last month-long war and the latest developments in the Middle East to the Daily Sabah. Mr. Maarouf appreciated Turkey's role in providing humanitarian aid to Gaza, and emphasized Turkey's support to the Palestinians in the interview.

How do you see Turkey's engagement with the Palestinian issue, especially PM Erdoğan's harsh words on Israel, and the incapability of the U.N. on providing peace?

I'm here since 2006, more than eight years, and I will tell you what I have observed. The Turkish Government is always dealing with the Palestinian issue as one of its priorities. We get support both politically and economically. Turkey is helping us in the international arenas, such as the U.N., and also in financing some projects. For instance, my contacts in the Prime Minister's office issued immediate instructions to provide food and medical aid. This process has already started. They even negotiate with the Israelis to facilitate the arrival of humanitarian aid to Palestine.

Last night, I was requested by the Ministry of Foreign Affairs, and informed that the Turkish government is ready to receive 200 injured Palestinians. This is the initial number. We are also trying to cooperate with the government to provide electricity for Gaza. The Karadeniz Company, for instance, is trying to do this through ships. So, the Turkish government is helping a lot, and trying to understand the situation. I don't want to compare it with a domestic policy, but the Palestinian issue is one of the top priorities of Turkish policy. Regarding Turkish society, we feel their sympathy and support towards Palestine and its people.

How would you evaluate the current situation, do you think that both sides of the conflict will extend the cease-fire?

This is a war that has been going on relentlessly for almost a month in Gaza, however, even three weeks before this war, there was another war in the West Bank. The Israeli Army began searching all of the houses, arresting 12 leaders, killing about 11 people, and demolishing a number of homes, which all started three weeks before the war in Gaza. This makes the situation tense in Palestine, and this is how the war moved into Gaza.

The Israeli government decided to start a war against Gaza, which started on July 7th, and lasted for a month. In the end, we reached a point where a cease-fire for 72 hours was brokered between the parties. This cease-fire will end tomorrow. Through this period, negotiation sessions took place in Cairo with Egyptian, Israeli and Palestinian delegates participating. Throughout these sessions, the Palestinian delegation presented their demands to the Egyptian officials, and Egyptian officials negotiated with the Israeli delegation. I think these negotiations will conclude in two or three days. I am expecting the current cease-fire to be extended.

Absolutely, you are right. The main aim of the Israeli attack is to prevent Palestinians from uniting. First of all, they have already prevented the united government from working by preventing ministers from moving between West Bank and Gaza. They did not allow any monetary transactions between the West Bank and Gaza, and this complicated the situation day-by-day in Gaza because people were unable to receive their salaries for a couple of months. So, the main aim of the war was to prevent the unity of the Palestinian government. If you look at the Israeli statements given throughout the war, they are saying, "We're attacking Hamas, but we are not going to let the regime of Hamas fall down" (it means, they will break apart the unity government by allowing Hamas to rule in Gaza instead of the Palestinian Authority). Secondly they say, "We are going to allow President Abbas to control the Rafah border, but not Gaza." This indicates that their aim is to keep Gaza separated from the West Bank. The main aim of the Israeli campaign is to not give the Palestinians a chance to be united again.

What does the Palestinian people and government need for a long-lasting peace?

We are witnessing a tense situation in Palestinian society such as what happened before the Second / Al Aqsa Intifada. Do you think that a third one is coming?

There were two Intifadas. The first one was in 1987, and it was a public Intifada. It was a popular resistance movement without arms. Through this Intifada, we gained support of the whole world. Israel lost a lot of the support it possessed. In 2000, after the Camp David Negotiation Process, the Second Intifada began. But this time, it was armed, and frankly speaking, Israel used this as a pretext for its atrocities against the Palestinians, stating to the international community that, "Israel has the right to defend itself." So, if an armed Intifada happens, this will be to the benefit of Israel.

Because of this, we are trying not to wage an armed Intifada, and this is what is happening now. Palestinians, since the beginning of June, are participating in daily demonstrations that result in civilian casualties. We are trying to control our territories by resisting. In Palestine, if Palestinians continue to live and stay in their houses, this is resistance, because Israelis want us to be göne.
Last Update: Aug 11, 2014 1:30 am
RELATED TOPICS