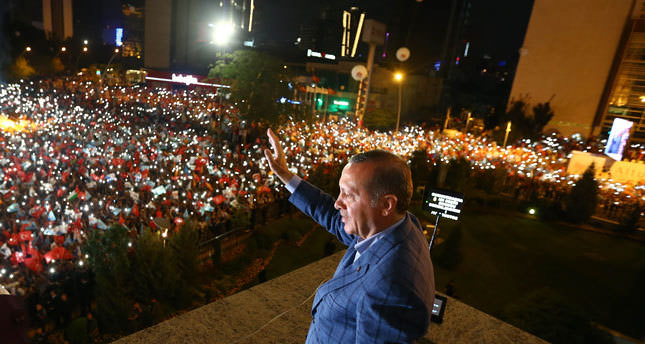 The ruling AK Party will hold a congress to elect a new leader who will also head the government on Aug. 27, a day before President-elect Recep Tayyip Erdoğan becomes the head of state

President-elect Recep Tayyip Erdoğan late on Sunday said Turkey needed to rise above ethnic, religious, political divisions or life choices and focus on building a new future. Addressing a huge crowd celebrating his victory in Sunday's presidential election, Erdoğan said there was a need to forget past disputes and build a new Turkey. As Erdoğan readies to take over as president on Aug. 28, the ruling Justice and Development Party's (AK Party) Central Decision-Making and Administrative Committee met yesterday to decide how to proceed. AK Party's Spokesman Hüseyin Çelik, speaking after the meeting, said the party would be holding a congress on Aug. 27 to elect a new chairman, who would also be the new prime minister. Among the names mentioned for the prime ministerial seat are Erdoğan's close colleagues Foreign Minister Ahmet Davutoğlu, Health Minister Mehmet Müezzinoğlu and former Transportation Minister Binali Yıldırım, none of whom are bound by the threeterm limit for deputies.

Addressing tens of thousands of cheering, flag-waving supporters from the balcony of the AK Party headquarters in Ankara, Erdoğan pledged to be the president of all 77 million citizens, not just only those who voted for him. Assuring the crowd that he will embrace all segments of society, Erdoğan affirmed that "political views can be different, lifestyles can be different, beliefs, sects, values, ethnic origins, and languages can be different. But, we all are owners of this country," and welcomed the whole nation and hoped to walk toward the 2023 vision all together.

Erdoğan, who is the 12th president of the Turkish Republic according to the unofficial results, said that he deeply wants to give a fresh start to a social compromise process across the country with the help of citizens. Adopting a conciliatory and inclusive tone during his speech, he promised a "new social reconciliation process" where all Turks of whatever origin or belief will be equal citizens of the country.

Highlighting his new and pioneering vision of Turkey, he declared, "It is not only Recep Tayyip Erdoğan who won today. Today, national will has won once again. Today, democracy has won once again. Today, those who do not like me have also won as much as those who do like me. Without a doubt, a new Turkey, great Turkey, pioneering Turkey has won today. Today is a milestone for Turkey. Today is the day Turkey is born from its ashes and a new Turkey is built. "I will be a president who wholeheartedly embraces the 77 million people, as I have done all through my life and all through my political struggle," Erdoğan vowed.

Calling out the followers of the Gülen Movement, which is believed to have carried out a defamation campaign with the Dec. 17 and Dec. 25 operations against the government ahead of the March 30 local elections, Erdoğan said, "I am calling out for my naive brothers in the Gülen Movement. I am calling them to question the thing that was taught to them and what was imposed on them. Every question that they are going to ask themselves will let them understand our [the government] combat and goodwill."

Highlighting that the government's combating of the Gülen Movement is not a personal matter, but a matter for Turkey, Erdoğan said that whoever threatens Turkey's national security will be fought against.

Saluting those who support the idea of a "new Turkey" and sharing the enthusiasm of Turkey around the world, Erdoğan said that Sunday's election was not only the day that Turkey won, but also the day that Baghdad, Islamabad, Beirut, Sarajevo, Skopje, Syria, Damascus and Gaza won.
Calling out his opponents, Erdoğan said, "Those who denounced me as a "dictator" and "authoritarian" should please question themselves. Those who accuse us of one-man rule should please question themselves sincerely." He urged Turkish opposition parties to review their own policies toward the nation and invited them to join in with the AK Party's vision of a new Turkey.

Erdoğan pointed out that he has never been trapped by arrogance when he has succeeded and has never run away from questioning himself when he failed during his 12 years in office. "When we [the AK Party] made a mistake, we never feared admitting our mistakes. We never feared change or improvement. We have questioned ourselves and fought for change in every issue that does not compromise with Turkey's facts and common sense." Later in his speech, Erdoğan called on the entire nation to build a new and different Turkey together. "Today is the day to forget disappointments, today is the day to defeat estrangement. Today is the day of getting out of stereotyping, from the barriers in our minds and fears that have been imposed on us for years. Today is the day for a fresh start while we are opening the doors of new social compromising."