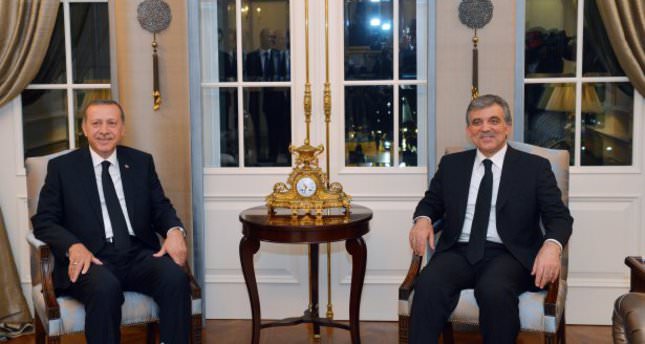 by AA Aug 12, 2014 12:00 am
Turkey's President-elect Recep Tayyip Erdoğan has welcomed President Abdullah Gül's decision to return to the ruling AK Party after his term as president.

Erdoğan, Turkey's outgoing prime minister, said Tuesday it is only "natural" that Gül will come back to "his party" as Gül too said during his farewell reception in Çankaya Presidential Palace in capital Ankara.

The Justice and Development Party, commonly known as AK Party, will gather its Central Executive Committee on August 27 to elect their new chairman.

Abdullah Gül can go back to AK Party only after August 28, the date he will finish his term as the president.

Erdoğan also said that it would be "wrong" to name one person as the AK Party chairman and another as prime minister.

"The Central Executive Committee will gather on August 27 to resolve one issue, that is, who will become the new chairman of the party," said Erdoğan.

Erdoğan was elected president on Sunday by an outright majority, securing nearly 52 percent of the vote, according to unofficial tallies.

Gül was one of the founders of the AK Party together with President-elect Recep Tayyip Erdoğan, who became the country's 12th president for a five-year term in Sunday's first-ever direct poll to pick the head of the Turkish state.

At his farewell reception on Tuesday night, Gül thanked all government agencies for their work during his presidency, and praised Turkey's democratic maturity.

"Democracy is a process of perfection. This process includes addressing deficiencies and redressing failures through criticism and self-criticism, and amelioration of practices through reform," said Gül.

"Leaving my post, I am seeing with joy that Turkey has reached a democratic maturity level that allows it to rectify its mistakes."

Gül also said that the current state of affairs on the international arena meant that "The existence of an ever-powerful, stable and prosperous Turkey is needed for regional and world peace."