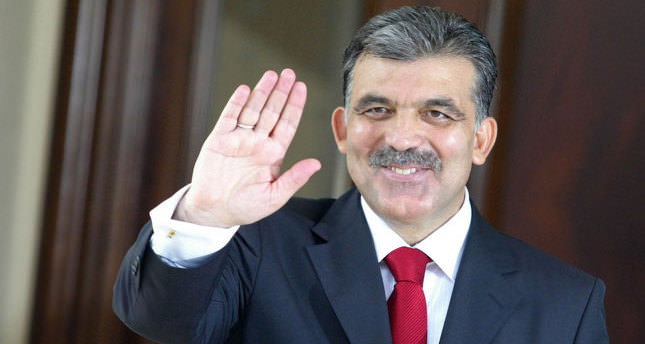 by Daily Sabah Aug 12, 2014 12:00 am
Outgoing Turkish President Abdullah Gül is welcome back into Turkey's ruling Justice and Development Party (AK Party), said Deputy Prime Minister Bülent Arınç, although it is not clear what his role in the party will be. In a televised interview on Tuesday, Arınç ruled out Gül being chosen as party chairman as the party demands the prime minister and party leader to be the same person.

As Gül is not a parliamentarian, the party would have to wait until June 2015 general elections for deputyship, which will give him access to the position of prime minister. However, he does not have to be a parliamentarian to be a minister in the cabinet. Arınç made his comments ahead of a party meeting to be held on Aug. 27, when the party is expected to choose a prime minister before President-elect Recep Tayyip Erdoğan takes his oath of office the next day. Gül said he would officially remain head of state until Aug. 28. Arınç went on to say, "It is arguable whether Gül would accept any forced formula to become the prime minister or whether the party would like such a formula." "Erdoğan and members of the party's central executive committee have agreed that the chosen party leader will be the prime minister for the time being because it will enable continuation, consistency and stability in the party," he said. "This decision has not been taken against Abdullah Gül. This is a legal decision taken under the internal dynamics of the party and necessity of the current circumstances."

Arınç said he does not think Gül will be "saddened" by this decision, and requested others to not to evaluate it as "an action and a decision taken against him." Gül was one of the founders of the AK Party together with President-elect Erdoğan, who became the country's 12th president on Sunday's first-ever direct election. "I am president until Aug. 28, and after this, it is only natural for me to return to my party," Gül told reporters in Ankara on Monday. "I have no doubt that I will return to my party," he added.
Last Update: Aug 13, 2014 11:41 am
RELATED TOPICS