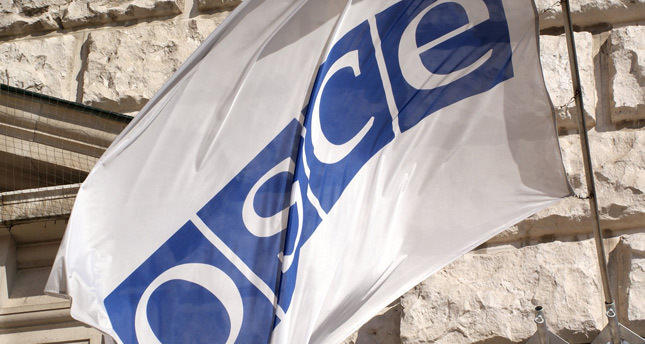 by Daily Sabah Aug 12, 2014 12:00 am
International observers from the Organization for Security and Cooperation in Europe, in a statement yesterday, said all presidential candidates were able to campaign freely and freedoms of assembly and association were respected, praising the vibrant political life in Turkey.

The Organization for Security and Co-operation in Europe (OSCE) observed the presidential elections in Turkey where people voted for the president for the first time, and praised the elections for being free and fair." Three candidates, representing different political positions, were generally able to campaign freely, and freedoms of assembly and association were respected in the Aug. 10 presidential election in Turkey," the OSCE statement read, stating "there is a vibrant political life in Turkey."

Additionally, OSCE observers noted the Supreme Election Board (YSK) and the election administration performed professionally, and there was overall confidence in the elections. Observers also praised the oversight mechanism whereby political representatives from across the country were present at polling stations to prevent any obstruction to the procedures and to comply with the regulations. A number of observers were dispatched to different cities including Ankara, Istanbul, İzmir and Antalya to watch the elections. According to Turkish media outlets, OSCE representatives noted that the elections were conducted in a calm and organized atmosphere. They argued that in some voting stations, voter turnout was relatively low (between 40-50 percent), which they claimed was due to many people being on vacation at this time of the year while disregarding the fact that the overall voter turnout was 73 percent.

Head of PACE delegation Meritxell Mateu Pi expressed that the direct election of the president marks the start of a new era in Turkey's democratic development, and that they will continue to work with Turkey and support its efforts in fulfilling the Council of Europe's standards. Although critics argue that the voter turnout was low in Turkey's recent presidential elections, a look at voter turnout in a number of developed countries suggests the claims do not represent a fair image. The U.S., hailed to be one of the greatest democracies in the world, had a voter turnout of 57.5 percent in the last presidential election, while Canada had 61.4 percent and Switzerland had 54 percent. Analysts argue that a number of factors including compulsory voting and the registration process all affect the voter turnout.

While Turkey does not have compulsory voting, the registration process is claimed to be relatively convenient as Turkish citizens who are registered residents are automatically assigned to a voting station by the system. YSK has been criticized for its inconvenient appointment-based system for 4 million expat Turks eligible to vote, as only about 240,000 of these people cast their ballots.
Last Update: Aug 12, 2014 11:44 am
RELATED TOPICS