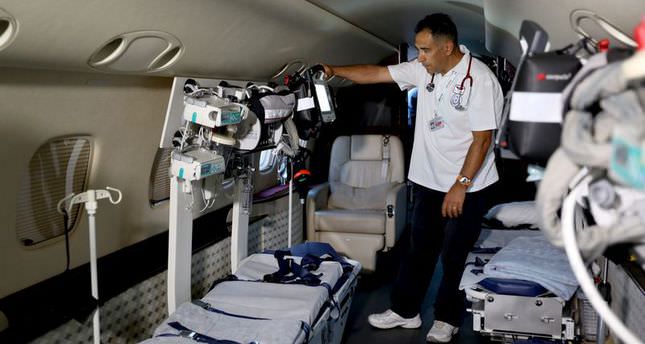 by Daily Sabah with AA Aug 12, 2014 12:00 am
Three more Palestinians injured during Israel's offensive in the Gaza Strip have been brought from Egypt to Istanbul for treatment on Tuesday.
The wounded men, Mohammed Abu-Dayya, Ali Alangar and Hassan Asualeya were flown to a public hospital in collaboration with Turkish Cooperation and Coordination Agency (TİKA) and the Turkish Health Ministry. One of them is severely injured, officials said.

Turkish Foreign Minister Ahmet Davutoğlu announced Monday morning that Turkey plans to receive at least 200 Gazans who are in need of treatment, some of whom are coming from Egypt. The statement comes after four injured Gazans, including a child, were brought to Turkey for medical treatment early Monday morning. "The wounded in Gaza cannot be treated due to the lack of electricity," Davutoğlu said.

"We want to help our brothers and sisters who are trying to pursue their lives in very difficult conditions." Besides welcoming wounded Gazans for treatment, Turkey will also provide humanitarian aid to Gaza, said Davutoğlu. According to one TİKA representative, some of the wounded will be brought directly from Gaza. The foreign minister also said that Turkey is working on negotiations for a permanent cease-fire between Gaza and Israel.

The Turkish Disaster and Emergency Management Agency (AFAD) and the U.N. Relief and Works Agency for Palestine Refugees in the Near East (UNRWA) have joined forces to open an air corridor to provide humanitarian aid to the people of Gaza. Government officials indicate that the air corridor will allow Turkey to provide 11,000 boxes of humanitarian aid to victims of Israeli attacks. Two additional flights, on Aug. 15 and Aug. 19, will carry 7,500 boxes of aid to allow the people of Gaza, who have been largely unable to meet their most basic needs, to have access to a range of items including canned tuna, red meat, beans, hummus, juices, tea, sugar, tahini, and milk powder.

At least 1,943 Palestinians were killed and nearly 10,000 others injured in relentless Israeli attacks on the Gaza Strip since July 7.

Israel and Gaza-based Palestinian factions are currently observing a three-day cease-fire that started Monday to coincide with indirect talks in Cairo aimed at reaching a durable cease-fire agreement.