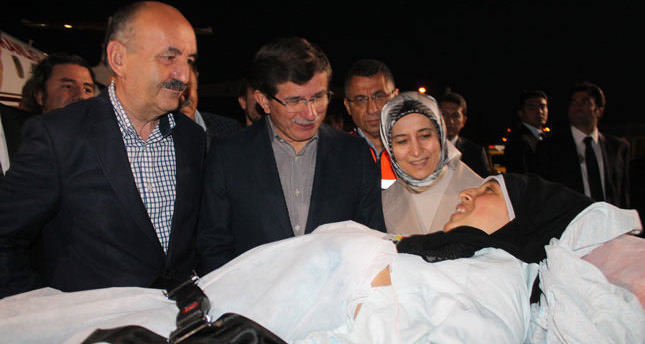 The air corridor established between the Gaza Strip and Turkey has begun to bring Palestinians wounded in Israel's assault. Foreign Minister Davutoğlu and Health Minister Müezzinoğlu, welcoming the first arrivals, said 200 Gazans in need of treatment would eventually come

Foreign Minister Ahmet Davutoğlu announced that Turkey plans to receive at least 200 Gazans who are in need of treatment. The statement comes after four injured Gazans, including a child, were brought to Turkey for medical treatment early Monday morning. "The wounded in Gaza cannot be treated due to the lack of electricity," Davutoğlu said. "We want to help our brothers and sisters who are trying to pursue their lives in very difficult conditions." Besides welcoming wounded Gazans for treatment, Turkey will also provide humanitarian aid to Gaza, said Davutoğlu. The foreign minister also stated that Turkey is working on negotiations on a permanent cease-fire between Gaza and Israel.

The Disaster and Emergency Management Agency of Turkey (AFAD) and the U.N. Relief and Works Agency for Palestine Refugees (UNRWA) have joined forces to open an air corridor to provide humanitarian aid to the people of Gaza. The joint initiative follows a controversial Israeli assault on the Gaza Strip that has continued since July 7. On Monday, Aug. 11, Deputy Prime Minister Beşir Atalay and AFAD President Fuat Oktay attended a public ceremony at Esenboğa International Airport in the Turkish capital, which marked the shipment of 3,500 boxes of humanitarian cargo to Palestine.

Government officials indicate that the air corridor will allow Turkey to provide 11,000 boxes of humanitarian aid to the victims of Israeli attacks. Two additional flights, on Aug. 15 and 19, will carry 7,500 boxes of aid to allow the people of Gaza, who have been largely unable to meet their most basic needs, to have access to a range of items including canned tuna, red meat, beans, hummus, juices, tea, sugar, tahini, and milk powder. Rifat Hisarcıklıoğlu, the president of the Union of Chambers and Commodity Exchanges of Turkey (TOBB) has contributed another 1,000 boxes of food, containing rice, vegetable oil, olives, halva, sugar and pasta.

The authorities have also announced that AFAD will send 15,000 tons of flour to Gaza via five vessels between Aug. 30 and Nov. 16 in an effort to help Palestinians overcome serious problems that have plagued the area for over one month. Once the cargo reaches Ben Gurion International Airport in Tel Aviv, UNRWA officials will coordinate the distribution of humanitarian assistance on the ground.