Turkish gov't draws roadmap for Palestinian cause at OIC meeting 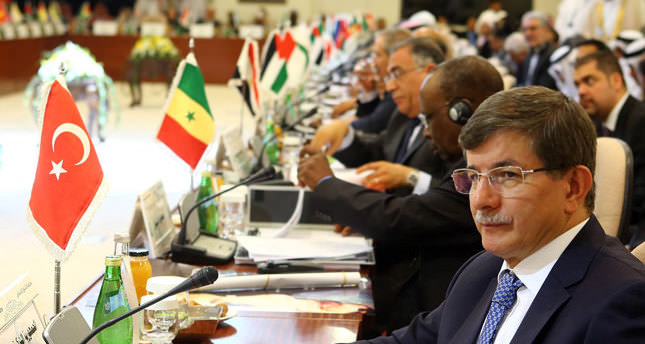 Turkish Foreign Minister Ahmet Davutoğlu yesterday presented a roadmap, including seven steps to reach the Israel-Palestine conflict to a conclusion in an OIC meeting organized with Turkey's initiative

Ahead of the OIC meeting, Davutoğlu stated that Turkey offered a roadmap, including seven articles to ensure a permanent cease-fire, to stop Israeli attacks on Gaza, to rebuild the Gaza Strip, to support the Palestine unity government and to recognize Palestine as a state. Highlighting that Turkey launched a significant and extensive initiative during the days that Israeli attacks on Gaza intensified, Davutoğlu echoed his sentiments that Turkey called the U.N. Security Council and the U.N. Human Rights Council and the OIC Expanded Executive Meeting for an emergency forum.

Speaking at the meeting, OIC Secretary-General İyad Emin Medeni stated that Israel has committed war crimes and violated international law. Calling on the international community to take action to deliver humanitarian aid to needy Gazans, Medeni noted that the OIC's priority is to stop Israeli attacks on Gaza, lift Israel's blockade on Gaza and strengthen the Palestine unity government.

On Monday, the Turkish Foreign Ministry announced that Israeli attacks on Gaza and efforts to ensure a permanent cease-fire will be discussed during the meeting that was scheduled with the initiative of the Turkish government while the humanitarian aid issue also headlines the agenda. The ministry declared that Turkey will also continue its efforts to ensure a permanent and negotiated cease-fire between Israel and Palestine in every international platform.

Meanwhile, the Turkish government's initiatives to bring injured Gazan people to Turkey for treatment continues. Three more Palestinians injured during Israel's offensive in the Gaza Strip have been brought from Egypt to Istanbul for treatment on Tuesday. The wounded men, Mohammed Abu-Dayya, Ali Alangar and Hassan Asualeya were flown to a public hospital in collaboration with Turkish Cooperation and Coordination Agency (TİKA) and the Turkish Health Ministry. One of them is severely injured, officials said.

Turkish Foreign Minister Ahmet Davutoğlu announced Monday morning that Turkey plans to receive at least 200 Gazans who are in need of treatment, some of whom are coming from Egypt. The statement comes after four injured Gazans, including a child, were brought to Turkey for medical treatment early Monday morning. "The wounded in Gaza cannot be treated due to the lack of electricity," Davutoğlu said. "We want to help our brothers and sisters who are trying to pursue their lives in very difficult conditions."

Two additional flights, on Aug. 15 and Aug. 19, will carry 7,500 boxes of aid to allow the people of Gaza, who have been largely unable to meet their most basic needs, to have access to a range of items including canned tuna, red meat, beans, hummus, juices, tea, sugar, tahini, and milk powder. At least 1,943 Palestinians were killed and nearly 10,000 others injured in relentless Israeli attacks on the Gaza Strip since July 7.


Israel and Gaza-based Palestinian factions are currently observing a three-day cease-fire that started Monday to coincide with indirect talks in Cairo aimed at reaching a durable cease-fire agreement.