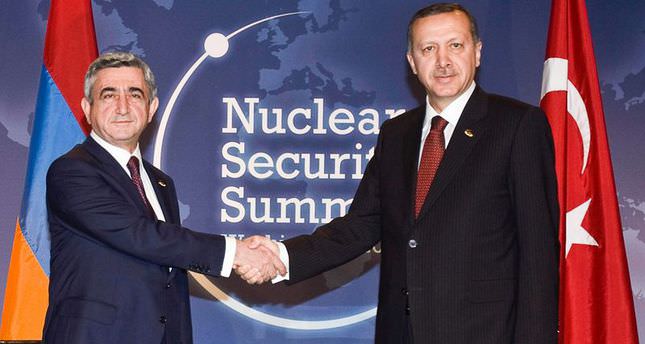 by Daily Sabah Aug 14, 2014 12:00 am
Armenian President Serzh Sargsyan has recently congratulated the election of Prime Minister Recep Tayyip Erdoğan as Turkey's president and has sent his warm messages to Turkey.

Wishing good health, prosperity and development for the people of Turkey, Sargsyan stated he is hopeful that Erdoğan will greatly contribute to the establishment of bilateral relations between Armenia and Turkey without any prerequisites.

Erdoğan has recently expressed his condolences over the World War I massacres of Armenians, which he called "our shared pain," a move which has been greatly appreciated by the Armenian minority in Turkey. Furthermore, the AK Party is in the process of returning the properties of Armenian foundations in Turkey, which was also welcomed by the Armenians in Turkey with many representatives calling them "positive developments." Likewise, others have expressed that they finally "got to breathe thanks to the AK Party" and acknowledge the fact that change cannot occur overnight and is a continuous process.

Diplomatic relations between Armenia and Turkey have been halted since 1993 due to the Karabagh conflict between Azerbaijan and Armenia. Moreover, in January 2013 Sargsyan has stated that Armenia would not retreat regarding the Nagorno-Karabagh issue despite sanctions imposed by Turkey and Azerbaijan.

According to the Ministry of Foreign Affairs, Turkey aims for a normalization of relations between all countries under the scope of its zero-problem with neighbors policy. In 2005, Turkey sent a letter to the then-prime minister and requested the establishment of an expert commission (Common History Commission) to analyze and research the 1915 incidents along with researching the archives of other countries. Likewise, two protocols to develop bilateral relations were signed in 2009 but Armenia has paused ratification of the protocols.