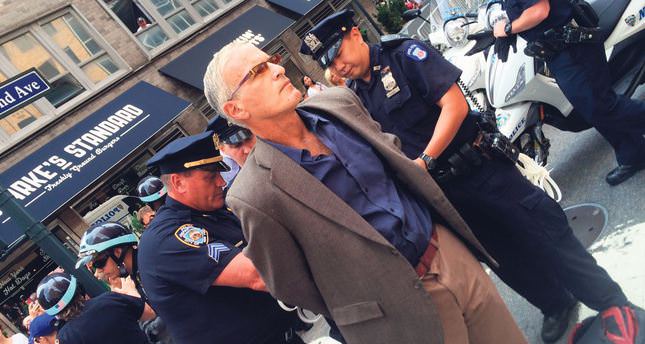 Speaking to Daily Sabah, Jewish-American political scientist Norman Finkelstein, who was detained at a pro-Palestine rally, asserted that many Jews are opposing Israel's policy towards Gaza

Professor Norman Gary Finkelstein is an American political scientist and activist. He has been writing and lecturing about the Israel-Palestine conflict. The best known among the eight books he authored is "The Holocaust Industry" which reflects on the exploitation of Jewish suffering. Finkelstein claims that Israel and the Jewish community in the U.S. have exploited the Holocaust to legitimize certain policies. Today, the people of Gaza find themselves under attack yet again, and people from different countries, faith groups and ideological backgrounds remain on the streets to protest Israeli massacres in the region. Last month, he, along with other activists, was arrested at a pro-Palestine rally in New York just hours after agreeing to an interview with Daily Sabah on the most recent developments in Gaza.

Daily Sabah: First of all how does it feel to get arrested for protesting Israel?

Norman Finkelstein: It felt like it was not like nearly enough. It was not a significant enough action because I don't believe these actions can really be successful unless they are mass actions. You can have individual actions effective if the individual has a huge amount of moral authority and a huge following. So, for example when Gandhi went on a hunger strike he was not just representing himself, he was representing 450 million Indian people and the British were fully aware if Gandhi died on hunger strike the 450 million Indian people would erupt in massive violence.

DS: You argue that Israel exploits the suffering of European Jews during the Holocaust to continue the policy of Zionism and to justify the ongoing genocide against the Palestinian people. Due to criticism of Israeli policies, you have been called an "anti-Semitic Jew" even though your parents were survivors of the Warsaw Ghetto Uprising and Auschwitz and Maijdenek concentration camps. What would you like to say about this stigmatization?

NF: You know those sorts of things, when Israel said them in the past, they had a certain amount of effectiveness, but nowadays Israel doesn't even say those sorts of things anymore. Because so many Jews are opposing Israeli policy, even mainstream American Jews are opposing Israeli policy. Using epithets like self-hating Jew or anti-Semitic Jew doesn't work anymore because there are just too many Jews who are opposing the policy. What has been said repeatedly is that there is a significant rise of anti-Semitism in places like France and Great Britain and so forth and you know probably there is some truth to that. I won't be surprised. Here is a state, it calls itself a Jewish state and it claims to be acting in the names of the Jewish people, so when a state calls itself a Jewish state and claims to act in the name of Jewish people and it's incinerating babies every day, it is going to give a rise to anti-Semitism. If there is a rise in anti-Semitism, there is a simple solution. The solution is stop killing Palestinians and let them live a normal life and the anti-Semitism would diminish.

DS: Israeli Prime Minister Benjamin Netanyahu recently argued that Hamas was responsible for the murder of three Israeli teenagers and proceeded to launch an assault on Gaza. Meanwhile, others claim that the Israeli authorities have confessed to the non-involvement of Hamas in the murders. What is Netanyahu up to this time? There is also speculation that Gaza has vast reserves of natural gas, which raises questions about a secret agenda regarding energy.

NF: It had nothing to do with the natural gas. Politics sometimes has its own dynamic and it is not always connected directly with economic issues. There was a unity government formed between Hamas and the Palestinian authority. This unity government, surprisingly, was legitimized both by the U.S and EU. Prime Minister Netanyahu was enraged because Hamas is quote in quote called a terrorist organization. He was afraid that Hamas would be legitimized and that would have two consequences for Palestinians. First of all, that would strengthen them politically if Hamas and the Palestinian authority are part of the same government and also it would put more pressure on Israel to sign an agreement ending the occupation. Netanyahu looked for a pretext to provoke Hamas. And then a gift dropped into his lap, which was the abduction of three Israelis, which he knew had nothing to do with Hamas. But he found his pretext and went on a rampage in the Gaza Strip hoping to provoke a reaction from Hamas. Hamas held back and started to fire rockets, which are just projectiles. Israel used that as an excuse to pound Hamas.

DS: Do you think reconciliation efforts between Hamas and the Palestinian Authority will continue?

NF: It is over. Because the Palestinian authority is working with the U.S and working with Israel to see that Hamas was set for a major defeat. And in fact they did suffer a major defeat. They destroyed everything there. They mowed the lawn. They taught the people of Gaza a lesson. They are not lifting the blockade. They stated that they are not going any further with the ceasefire negotiations. And they will do is they are going to withdraw to Israel when the Hamas' so called rockets are totally ineffective and they will just continue bombing Gaza and won't do any more fighting. Their soldiers are gone. They won't suffer any causalities -no civilians no combatant causalities- until Hamas' rockets are finished they have none left.

DS: The Palestinian/Gazan side of the story is poorly covered in the media. Recently, Alan Dershowitz, argued on CNN that "Israel is under attack from the underground, sea and air," and added, "Just consider how many Jews will die if Israel does not attack Gaza and destroy Hamas." What would you like to say about this comment?

NF: It is just pointless to talk about Mr. Dershowitz. He is a complete imbecile. He doesn't know anything. He has never read a book on the subject. He just gets his talking point from the Israeli consulate and they think he is an effective speaker.

DS: You have told that "American Jews have effectively hijacked the holocaust to blackmail Europe" in the documentary film "The American Radical". When we look at Europe, we see that EU is silent towards the massacre in Gaza today. Is it the fear of being labelled as anti-Semite?

NF: Actually not. I don't think anyone cared about people of Gaza this time. Everybody hates Hamas. They didn't have to bring up the Holocaust. Hamas is crazy. Islamic jihadists, radicals whatever they want to call. Everybody was happy to see Hamas defeated. Leaving aside the Latin American countries who have shown the only principal support for the people of Hamas have exactly support of two countries in the world. Qatar and Turkey. That was it. Everybody else wanted to see them defeated.

DS: Marie Harf who serves as the deputy spokeswoman of the U.S. State Department has said, "We will stand up for Israel in the international community, even if it means standing alone." And Obama has recently spoken and asked Hamas to give one captive soldier back. As if nobody cares about how many civilians, babies and children were killed in Gaza.

DS: The Obama administration also remained silent in the face of last year's massacres in Egypt. Some commentators had argued that President Obama would assume a tougher stance toward Israel after his 2012 re-election. Why did Obama adopt a different policy?

NF: People have all these ideas, "Oh, it is his second term so he doesn't have to worry about it." You hear this all the time when there is a presidential candidate. It never happens. Obama is completely devoted to his sponsors, his backers, the ruling class. He looks out for U.S. national interests. He is not going to suddenly change because it's his last term of office. Obama is behaving like every other president. The problem is the people are stupid and they think that just because he is black and he looks cool and hip that somehow he is going to do something different. When a ruling class chooses a candidate to run for office they are very careful about who to choose and they knew that this guy would do what they wanted him to do. They don't make mistakes like that. The only one who changed out of office and was at least being decent was Jimmy Carter, and that was when he was already finished.

DS: By the way talking about Egypt, Abdel Fattah el-Sisi attempted for a cease-fire between Israel and Hamas, which was not welcomed by Hamas. Do you think el-Sisi wanted to legitimize his rule?

NF: He didn't attempt for anything. He is not right enough to figure anything out his own. That was Tony Blair. Blair had two goals in mind. To present Hamas with an ultimatum that it couldn't accept so that it will give Israel pretext to attack Gaza. And secondly he wanted to legitimize el-Sisi and turn him into a statesman. El-Sisi was just a useful idiot for Blair. And it also serves for El- Sisi's interests to get the legitimacy.

DS: Let's talk about Mohamed Morsi, the ousted president of Egypt. Israel first time came across with such government which is not for Israel's interests. Then Morsi was deposed by the military coup and Muslim Brotherhood were removed from power in Egypt. Do you agree that this coup was for saving the benefits of Israel?

NF: No. The coup was orchestrated. First of all U.S seemed like he was ready to work with Morsi. He wasn't a disaster for the U.S. During the 2012 Israeli Massacre in Gaza, Egypt was the negotiator. And U.S was willing to work with Egypt at that point. But the thing was there was a ruling elite in Egypt that was determined to get rid of Morsi and they orchestrated the coup -the army, the business and the media. They all worked together. And Muslim Brotherhood made many mistakes but even if they did everything right, they couldn't have probably succeeded. And then once the coup was done and you have the old Mubarak regime back in new face but still the old. It was not Israel. It was the old elites of Egypt, which didn't like the fact that they had been, after 50 years of controlling everything they had lost power. They worked behind the scenes to make sure Muslim Brotherhood would fail. And once it failed they were back in power. U.S of course is happy to work with them because they have worked with Mubarak for 30 years.

DS: So that is how you said before in your interview given to Namawaran Network Corporation (NNC) : "U.S prefers an undemocratic to an elected government?

NF: Yeah, it is easy to work with them. Don't have to worry about the people thing.

DS: Do you think the people of Egypt were misguided with the arguments of lack of freedom and the worsening economy and they were poured into streets?

DS: Concluding the interview, I feel that you are pessimistic about Gaza.