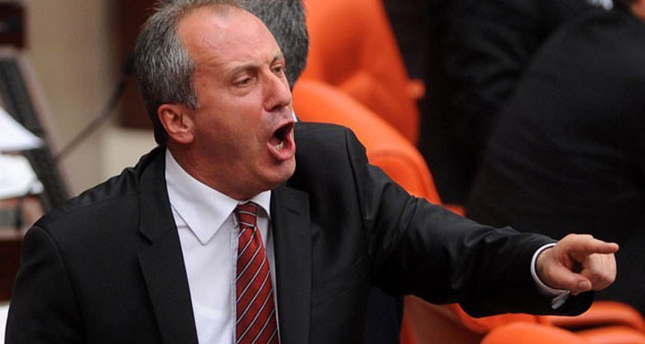 Another election defeat creates deep rifts within the opposition CHP, with the leadership and dissidents gunning for each other's removal

The main opposition Republican People's Party (CHP), which is constantly shaken by intra-party conflicts, has entered another troubled period after the presidential election defeat on Aug. 10. Starting with the announcement of former Secretary-General of the Organization of Islamic Cooperation (OIC) Ekmeleddin İhsanoğlu as the joint presidential candidate, the turmoil within the party reached a new level of intensity.

CHP's Group Deputy Chairman Muharrem İnce has also anounced via Twitter the council meeting but more shockingly his resignation. He said that he will step down from his post very soon.

Turkish Prime Minister and President-elect Recep Tayyip Erdoğan said in a provincial chairmen meeting, "Our [AK Party] desire for a new Turkey is a new opposition."

Making harsh remarks on the CHP's election failure, CHP Group Deputy Chairman Muharrem İnce reiterated Kılıçdaroğlu's "I took the risk" comment on İhsanoğlu and asked Kılıçdaroğlu to hold the general assembly. İnce said, "In that point, Turkey's establisher power, the CHP, is being dispersed by the agenda defined by the AK Party. I could make these statements to my party's administrative bodies, but I do not think that it would be helpful. Decision-making bodies [within the CHP] lost their functions."

İnce slammed the CHP by listing his objections. İnce said that he learned of the joint candidate İhsanoğlu while watching TV and the CHP administration disregarded that the party had a problem with adopting the joint candidate. İnce criticized Kılıçdaroğlu's forcing CHP voters to go to the ballot box with harsh rhetoric ahead of the election.

Also, İnce said that announcing a joint candidate in the first round goes against mathematic reasoning and said, "I always said behind closed doors that more than one candidate increases participation and Erdoğan cannot be elected in the first round. Being unable to anticipate it is politically ignorant."
Last Update: Aug 15, 2014 12:35 am
RELATED TOPICS