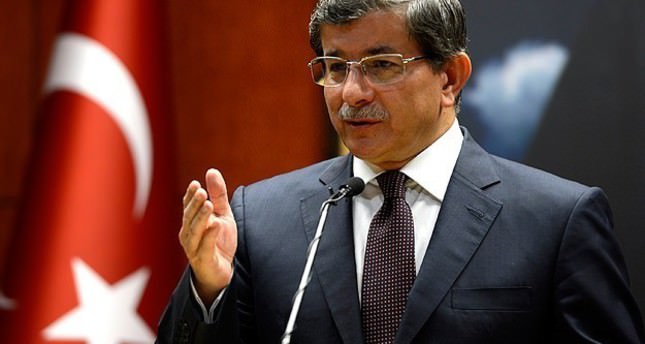 by Daily Sabah Aug 14, 2014 12:00 am
As Turkey and Qatar continue to cooperate to ensure a permanent solution for the Israeli-Palestinian conflict, Turkish Foreign Minister Ahmet Davutoğlu offered a 7-point plan on behalf of Turkey for the Palestinian cause at the Organization of Islamic Cooperation (OIC) meeting that was organized through Turkey's initiative in Saudi Arabia. Continuing to take action for the people of Gaza, Turkey drew a roadmap, including seven articles to rebuild the Gaza Strip, create an environment that will allow the establishment of a permanent cease-fire and deliver immediate humanitarian aid to the Gazan people, according to Davutoglu.

Davutoğlu stated that the first point in the roadmap is to intensify humanitarian aid by the Islamic world to Gaza, and he also touched on Turkey's initiatives and activities regarding humanitarian aid, such as bringing injured Gazan people to Turkey, and electricity and water issues. The second point is to ensure a permanent ceasefire that also includes lifting the Israeli blockade on Gaza. Davutoğlu noted that the international community should increase the pressure on Israel on this issue.

Highlighting that the infrastructure of Gaza has been severely damaged, the Turkish foreign minister stated that organizing a plan to rebuild Gaza together with the international community is the third point on the agenda.

Davutoğlu stated that Turkey offered the roadmap, including the seven articles, to ensure a permanent ceasefire, to stop Israeli attacks on Gaza, to rebuild the Gaza Strip, to support the Palestine unity government and to recognize Palestine as a state. Highlighting that Turkey launched a significant and extensive initiative when the Israeli attacks on Gaza intensified, Davutoğlu echoed his sentiments that Turkey called the U.N.
Security Council, the U.N. Human Rights Council and the OIC Expanded Executive Meeting for an emergency forum.

The foreign minister also noted that he touched on the coordination of aid during his talks with Palestine's prime minister. "The Turkish Red Crescent, the Turkish Presidency of Emergency and Disaster (AFAD), the Turkish Cooperation and Coordination Agency (TİKA) and the Turkish Health Ministry are in Gaza now." Noting that humanitarian aid to Gaza has exceeded $200 million (TL 432.58 million) in total, Davutoğlu added that Turkey is preparing for a more intensified humanitarian aid campaign for the upcoming term.