Erdoğan calls on people to not be afraid of Gülenists' blackmailing 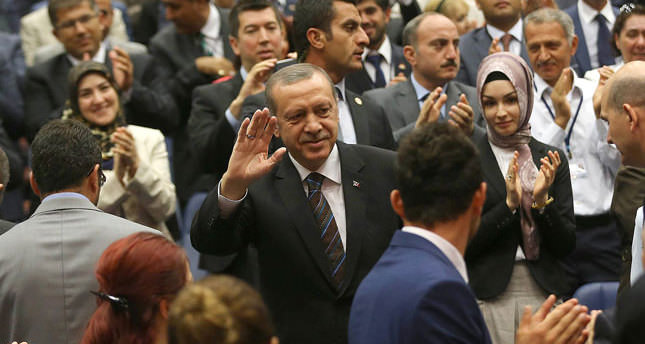 President-elect Recep Tayyip Erdoğan said the Gülen Movement is not only targeting himself, his family and colleagues, but Turkey's independence and state security. Erdoğan also urged people to not be scared of blackmailing by Gülenist infiltrators in state institutions

Speaking at an expanded meeting of the AK Party's provincial chairs in Ankara on Thursday, President-elect and AK Party Chairman Recep Tayyip Erdoğan underlined that the struggle against the Gülen Movement will stay within legal boundaries, and called on people to not be afraid of threats and blackmailing by Gülenists, whom he defines as a "national threat." Regarding the Gülen Movement led by the U.S.-based, controversial, self-exiled imam Fethullah Gülen, Presidentelect Erdoğan said there should be no retreat from efforts to eliminate the Gülenist threat posed to national security. "It is a promise for the nation that the challenge against the parallel treason gang [Gülenists' infiltration into state institutions] must be continued after the AK Party's General assembly on Aug. 27. We made up our minds in the National Security Council, though. That is a national security issue now," he said.

While he said that the Gülen Movement has a network based upon eavesdropping and montage tapes that threaten thousands of people, Erdoğan stressed out that the movement's real target is "not his family, [but] his colleagues and himself," and added, "That gang's purpose is our independence, our flag and our homeland." He also said, "Some might have sympathy towards this treason gang, but our holy nation instructed us to tackle this gang. I will sustain this tackle pertinaciously in person."

Reminding that today is also the 13th anniversary of the AK Party, Erdoğan said that the AK Party has never shared national sovereignty with any other power, and has been the hope of the nation and Muslim Ummah for the last 13 years. "In the past 13 years, the AK Party did not look in any other direction than our nation. When we established our party, those who expected a short life-span for us stumbled." Erdoğan also underlined that in the last 13 years they participated in nine elections in total and won all of them, three local, three general elections, two referendums and one presidential election.

Besides the AK Party's anniversary, Erdoğan said that this is also the International Rabia Day (anniversary of the Military coup's massacre in Egypt), and added, "there are two meanings of Rabia: one in Egypt, one in Turkey. In Turkey, Rabia means one nation, one state, one flag. We will keep this alive in that way. However, it is also the day of those who bravely stoodup against the coup in Egypt," Erdoğan said.

Erdoğan said that Turkey is the only country that raises its voice against slaughtering Egyptian Democracy, slaughtering innocent people, and the humanitarian plight in the Egypt, and added, "However, when you look at the some national and international media, you will see that they are making Turkey the target cruelly, unfairly and baselessly. There is one thing they would not be able to comprehend, which is Turkey no longer surrenders to this attitude."

After saying that no one lost in the presidential elections on Aug. 10, Erdoğan stressed that that he will be "everyone's president" after he is inaugurated in his post by taking the oath on Aug. 28. "The winner of the Aug. 10 elections is not Recep Tayyip Erdoğan, it is the Republic of Turkey. There is no loser of these elections. Nobody has a doubt about that I will be the president of 77 million people after I start my duty by taking the oath," he said. Regarding freedom of expression, Erdoğan has also emphasized the significance of the issue, noting, "I am ready to die for your free expression of ideas, even if I do not agree with them."

President-elect Erdoğan also urged his party to work for a stronger parliamentary majority in the upcoming general election that will be held in June 2015 to enable them to re-write the constitution, signaling no let-up in his drive to create an executive presidency. "I said before that the presidential elections would be the starting gun for the 2015 elections. Our target should be to acquire at least a majority to establish the new constitution. I don't believe that we will compromise on this," he said.

Regarding minority rights, Erdoğan underlined that all minorities live peacefully in Turkey. Reminding about Israel's attacks on Gaza and Turkey's stance on Jewish citizens, Erdoğan stressed that they are under our guarantee. "The Jews in Turkey are under our protection, and no one can have a negative attitude towards them. We don't have any problem with the Israeli people, our concern is just with the Israeli government. We will act with common sense, not with emotion," he added.

Erdoğan also said that the opposition cannot fulfill its duty by only insulting, and stressed the necessity of a renewal of the opposition. "A new opposition with a new vision is inevitable for the new Turkey," he added. President-elect Erdoğan will have to break formal links with the AK Party once he is sworn in as president on Aug. 28.
Last Update: Aug 15, 2014 1:30 am
RELATED TOPICS