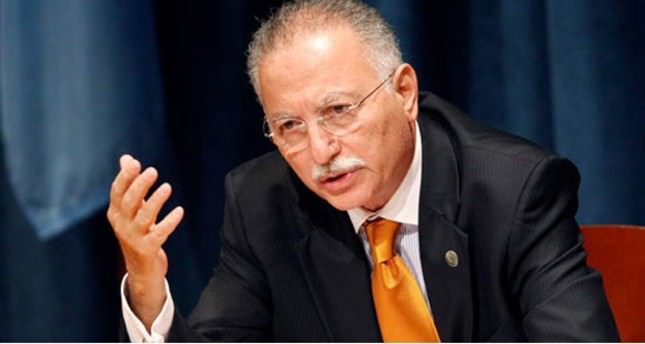 by Daily Sabah Aug 15, 2014 12:00 am
Following Turkey's first-ever direct presidential election saw that Justice and Development Party (AK Party) candidate Recep Tayyip Erdoğan elected as the 12th president of the country, an internal conflict within the main opposition Republican People's Party (CHP), which announced Ekmeleddin İhsanoğlu as joint candidate with the Nationalist Movement Party (MHP), surfaced with members criticizing CHP leader Kemal Kılıçdaroğlu. After a conflict sparked within the CHP following İhsanoğlu's defeat, 11 minor parties, who have no seat in Parliament but announced their support for the joint candidate, have begun to raise their voice.

In addition to the main opposition CHP and MHP, Democratic Left Party (DSP), Liberal Democratic Party (LDP), Democratic Party (DP), conservative Independent Turkey Party (BTP), conservative Great Union Party (BBP), Revolutionary People's Party (DHP), Turkey Socialist Workers' Party (TSİP), True Path Party (DYP), Women's Party (KP), Turk Party (TP), Right and Justice Party (HAP) announced their support for İhsanoğlu ahead of the Aug. 10 election. DP leader Gültekin Uysal said that after the joint candidate suggestion, the DP exerted efforts to manage the process efficiently. Congratulating Presidentelect Erdoğan, Uysal expressed his hopes that Erdoğan will use inclusive and embracing discourse during his presidential term. "There is no way to get a result by accusing the nation and those who did not go to the ballot box."
LDP leader Cem Toker said that the election result was a complete failure for the opposition.

Toker added, "They announced a candidate [İhsanoğlu] whose messages are barely heard against Erdoğan's, who is a candidate who has the experience and ability to address the masses. Mr. Tayyip's aggressive election strategy caused voters not to go to the ballot box. The MHP and CHP administrations and organizations did their best. It may not reflect to the public opinion since no central strategy was built."

HAP leader Yiğit Zeki Öztürk claimed that İhsanoğlu did his duty as joint candidate and conveyed the required messages to the public. Öztürk said, "But unfortunately, the CHP and MHP did not fulfil their duties as the joint candidate's parties. They did not hold rallies." Öztürk pointed out that the CHP and MHP could not manage to persuade voters to go to the ballot box, "which means, citizens do not believe in you [CHP and MHP.] In this election, Mr. Ekmel did not lose, the CHP and MHP lost because they could not reach out to their own voters."

DYP leader Çetin Açıkgöz said that the MHP and CHP's compromise on a candidate is the starting point of "compromising culture" in Turkey. Dismissing the statements of CHP deputies that the CHP should have announced a leftist candidate, Açıkgöz asserted, "If a leftist candidate had been announced, the prime minister [Erdoğan] would have garnered 70-75 percent of the votes."
Last Update: Aug 15, 2014 1:13 am
RELATED TOPICS