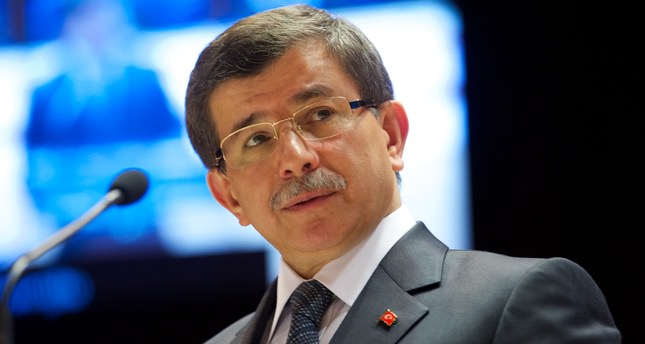 With millions of people in the region victims of aggression, the policy of helping those in need is a reflection of Turkey's humanitarian diplomacy, says FM

Remarking on Turkey's humanitarian aid to needy people in the region, Foreign Minister Ahmet Davutoglu stated, "The name of the diplomacy that I carried out is 'humanitarian diplomacy.' " Visiting Gazans brought to Turkey for medical treatment on Thursday, Davutoglu said that Turkey does not discriminate against people based on their ethnic origins, sect or religion when it comes to delivering humanitarian aid to the needy around the world. Reiterating that most of the countries in the Middle East are expecting help in a desperate way, Davutoglu said that the humanitarian tragedies, especially in Gaza, Iraq and Syria, are of special importance.

Davutoğlu noted that Turkey is trying to carry out an active policy towards the problems caused by the humanitarian tragedies in the region, while it continues to exert efforts to find a political solution to these problems. Regarding the Gaza conflict, Davutoğlu pointed out that Turkey has intensified its political efforts to ensure a permanent ceasefire in Gaza and continues to take injured Gazans to Turkey at the same time. The foreign minister stated that Turkey started bringing injured Gazans to Turkey on Aug. 10, and 13 more injured Gazans arrived on Thursday. "I visited each injured Gazan. I saw the fear in the face of [Gazan] children, but I also saw the happiness of being in a sister country," added Davutoğlu, vowing to continue to side with the Gazan people.

When asked whether there was a problem caused by Israel in bringing Gazans to Turkey, Davutoğlu said that talks on the issue continued between Foreign Ministry Undersecretary Feridun Hadi Sinirlioğlu and Israeli officials, and after they reached an agreement, the flights to bring injured Gazans began.

The foreign minister added that the delays in bringing Gazans to Turkey were caused by the selection of the injured people who have priority in treatment. Davutoğlu pointed out that Turkey wants to bring more injured Gazans for treatment, but most of them had no passport, which is why they traveled with a travel warrant given by the Palestine ambassador.

While Turkish aid organizations are among the rare organizations that lend a helping hand to the war-stricken people of Gaza, wounded Palestinians are continually being brought to Turkey despite interruptions by Israeli officials.

Turkey's Deputy Prime Minister Beşir Atalay told the press on Thursday that Turkey's air corridor, which helps to provide humanitarian aid to
Gazans, has been interrupted and slowed down by Israeli authorities. The humanitarian air corridor was established between Turkey and Gaza, which aimed to bring wounded Gazans to Turkey for medical treatment; however, Turkey is having difficulties in bringing wounded Palestinians to Turkey because of Israel authorities, Atalay said.

The Disaster and Emergency Management Agency of Turkey (AFAD) and the U.N. Relief and Works Agency for Palestine Refugees in the Near East (UNRWA) worked together to open an air corridor for providing humanitarian aid to the victims of the Israeli attacks that started on Aug. 11. "Israeli airports have been used for bringing patients to Turkey, [but] inexplicably, control mechanisms were conducted very slowly by Israeli authorities. We wanted to bring 40 wounded Gazans, we were just able to bring 18 of them only because we could not get the necessary permission [from Israel]" said Atalay. Atalay said that bringing wounded Gazans to Turkey will remain - they planned to bring 200 total wounded Gazans for medical treatment in Turkish hospitals.
Last Update: Aug 16, 2014 1:08 am
RELATED TOPICS