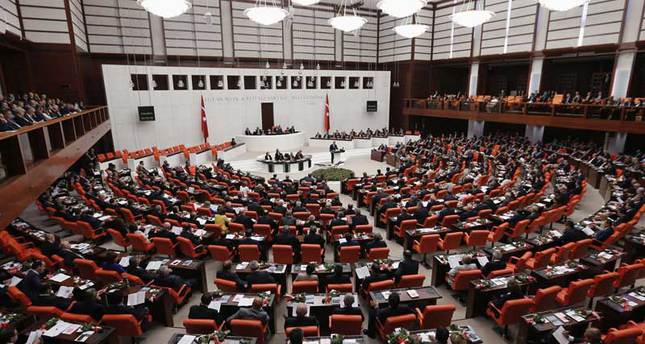 by Daily Sabah Aug 16, 2014 12:00 am
President-elect Recep Tayyip Erdoğan stated that the ruling Justice and Development Party (AK Party) aims to have a Parliamentary group that can draft a civil constitution.

Speaking to AK Party members during the celebrations of his party's 13th anniversary, Erdoğan stressed how the Parliamentarian constitutional commission - in which all three Parliamentary political parties participated with four deputies each - failed to draft a new constitution. "We have 326 deputies in the Parliament, and we were represented with three members, whereas all other parties that have 220 deputies in total were represented with nine members in the commission.

Main opposition [CHP] leader said they agree on 47 notches, but when I said 'okay, let's pass these agreed parts,' they stepped back," Erdoğan said. He added that if the AK Party had 330 deputies (2/3 of the parliament), he would have taken the constitutional matter to a referendum.
Erdoğan said if establishing a Parliamentary group that is determined to draft a new constitution fails, then the AK Party will aim to win 330 seats in the Parliament to take a drafted constitution to a referendum.

Venice Commission President Gianni Buquicchio recently stated that they are willing to work with Turkey to draft a civil constitution to replace the current one that was prepared during a period of military rule. "The Venice Commission is a body of constitutional experts from 60 countries.

In constitutional matters as elsewhere, it is important to learn from experience gained in other countries. Moreover, as a Council of Europe body, the Venice Commission would ensure that the text is in full compliance with European standards."
Last Update: Aug 16, 2014 1:03 am
RELATED TOPICS