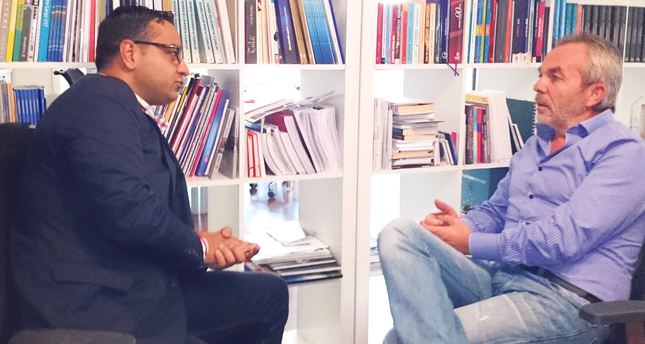 Speaking to Daily Sabah, the actor behind Erdogan's presidential election campaign, Erol Olçak, believes that the reason behind the success of Erdogan's campaign was tapping into the electorate's emotions, rather than teaching something to them

One of the most striking elements of the AK Party's campaign, which resulted in Prime Minister Recep Tayyip Erdogan's victory on Aug. 10, was the TV advertisements. The figure behind these advertisements and also the presidential campaign was Erol Olçak. Daily Sabah spoke with Erol Olçak, who has helped relay the party's political communication and organized its political campaigns since the AK Party's founding, about political communication in Turkey and around the world.

First of all, as the person who organized the political campaign, how do you evaluate the result of the election?

I think that the result was very successful. Social scientists can talk about the percentage however, when I plan my campaigns, I prepare the strategy and messages to win. I don't think about the percentage, because 52 percent means emerging victorious from the election, indisputably.

Higher percentages may have other political implications however, I focus on the success of the political campaign, which is, as I have already stated, indisputable. This indisputability relies on the fact that the election was competitive, free, and democratic.

The TV advertisements are widely discussed however, until the 2011 elections it was forbidden to employ political advertisements in Turkey. After 2011, with a change in Supreme Electoral Council's regulations and application by the Radio and Television Supreme Council, this prohibition was removed. After this we made a motto and an advertisement for elections, which may become a part of political history. Social media showed a great deal of interest in the advertisement; it made an impression on our people as if these kinds of advertisements were available and on screen for years. This is an important subject that I would like to point out.

While we were planning the political campaign and preparing its strategy, we have always wanted to emphasize our sympathy with the people. Elections are won with emotions. It is not possible to teach something to the people during the elections but it is possible to make them feel. With Prime Minister Erdogan's leadership and as a result of public opinion, we have produced advertisements, which extract these emotions. We won the people's hearts. "If you don't win people's hearts, you cannot be elected." This is what I have learned from Prime Minister Erdogan about political communications. This is a very deterministic definition. To achieve this, first of all, you need to be respectful to society, to the people, to the flag, and to social values, then you need to work hard, and lastly you have to become one with the people. According to these conditions, we have produced advertisements which transcend the 56 million voters, their political views, and contain all of our common values.

How are the advertisements created?

We have a pretty large team. We come with ideas and then share these ideas with the Prime Minister's election coordination centers' officials and advisors. However, the strategy, the messages, advertisements, and posters are our own productions. We have a long preparation period in which we test our advertisements, both visuals and the messages. We create focus groups all around Turkey, asking what they understand from the message and how they feel about it.

Have you done any political campaigns abroad?

I did Muhammed Mursi's election campaign, Saakashvili's in Georgia, and the Socialist Party's campaign in Austria. Prime Minister Erdogan's leadership and political campaigns are observed closely by all around the world; there are even academic articles and theses written about on the subject. They ask Prime Minister Erdogan and me, as well. Therefore, I receive many offers abroad. I can state that if we are to evaluate the political campaigns in regard to political communications, these campaigns are praised, or at the very least receive positive feedback from our colleagues in the U.S., France, Germany and Turkey. It is important to say that there isn't any agency in the world which has run nine political campaigns while being successful in all of them.

Regarding the advertisements in political campaigns, what are the differences between Turkey and Europe?

Elections in Europe are like festivals, with less conflicting campaigns. However, in Turkey, the election campaigns are not hard to run, but exhaustive. The people's political consciousness is prominent and therefore, they observe all of the candidates closely. Mistakes done in the campaign have dire consequences in Turkey.

The most difficult part is that you don't have the luxury to make mistakes, because the people don't forgive any mistakes. This is probably not the case about the rest of the Western world. Also, the voters make many decisions in the last 10 days and because of the fact that the people make many decisions in this period, it is important to plan everything from messages and posters to the harmony of this with the party representatives. For example, if I had made the aforementioned advertisement a month ago, it would not attract as many people as it did. The hardship of elections in Turkey is due to the competitiveness and high tension between the leaders and parties. It is an extra hardship to manage this tension.

You stated that the last 10 days are very important. Were there any crises before the elections?

In a political campaign, there are three important elements: consistency, continuity, and creativity. While strategy and planning in these campaigns are important, what makes them successful is Prime Minister Erdogan's continuous communication with the public since 2001. We have deployed advertisements in holidays in all of our election campaigns. Not one political party or leader has done this other than the AK Party and Prime Minister Erdogan. We are prepared beforehand for almost anything due to our creativity and dynamism. For example, we never had to think that the election would go on to the second stage, but even if it did, we were prepared with strategies, messages and actions.

What are the positive and negative aspects of working with Prime Minister Erdogan?

It is very pleasant to work with him. He promotes the messages perfectly. He has perfect discipline. He absolutely sticks to the plan regarding the messages and gestures, from the beginning to the end. For example, the rallies in the last week were finished with questions such as: "Are you ready for a New Turkey?" "Are you ready to consolidate Turkey's power?" Our fundamental message in our advertisements was that the people are the ones who are actually assigned to the office by voting for Prime Minister Erdogan. We combined this message with consolidating Turkey's power, and the Prime Minister held meetings promoting this advertisement.

The challenging part of working with the Prime Minister is that he wants a perfect design; he wants to see and know everything beforehand and he doesn't tolerate any latency. Because he is closely interested in the campaign process, our campaign presentations are full of discussions. He brings his team and we have to persuade each and every one of them. I should state that while he promotes the campaign perfectly, because he is a perfectionist, we are under heavy stress.
Last Update: Aug 18, 2014 2:00 pm
RELATED TOPICS