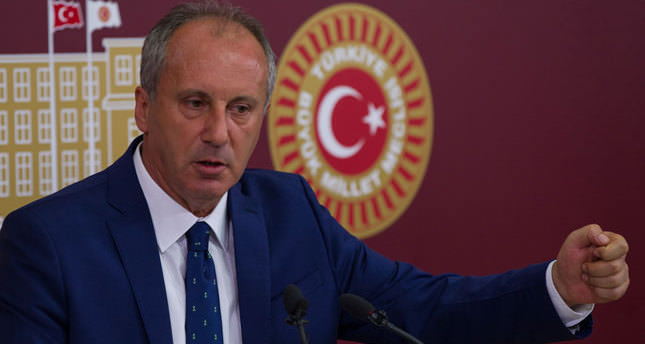 Republican People's Party (CHP) parliamentarian and party Deputy Chairman Muharrem Ince has announced that he will run for leadership of the party at an extraordinary party convention scheduled to be held on Sept 5-6. Defeat in the Aug. 10 presidential elections has caused an intra-party conflict within the CHP with some demanding Chairman Kemal Kılıçdaroglu to resign, including six hardline Kemalist deputies led by Emine Ülker Tarhan, the Ankara deputy. Although Kılıçdaroglu has refused to resign, he did finally bow to party pressures and the extraordinary congress decision was issued in the Central Executive Committee (MYK) on Sunday, Aug. 17.

A day after the announcement of the congress, Muharrem İnce declared that he will be running as a candidate to become the new party leader against Kemal Kılıçdaroğlu. İnce organized a press conference in the Turkish Parliament and where he said that he has resigned from his position in the CHP as party deputy chairman and declared his candidacy for the CHP chairmanship as expected. After mentioning the common issues in Turkey and in Turkish democracy, İnce said, "Turkey needs the CHP to resolve these issues; however the current administration of the CHP falls short on offering resolutions," adding, "I am resigning from the CHP's group deputy chair even though I am not obliged to do so. I had a phone call with chairmen Kılıçdaroğlu, gave the information to him, after that I officially sent my resignation letter to the administration."

In the press conference, İnce emphasized intra-party democracy issues, and criticized the CHP's consecutive election defeats. Ince criticized the current administration saying, "Before he came to power, Kılıçdaroğlu promised intra-party democracy, now this man is gone. Instead of him a man came in who determined every single affair in the party. I will bring democracy to the CHP." İnce also said that the current administration has fears and obsessions. "They organize a congress in 15 days - I can feel their fear, because of that I announced my candidacy. Why will it be that sudden? They organized the congress like an assault, without an audience, party members, and most importantly, without the attendance of the nation. They are escaping from the people - they will make the congress in a place like a movie hall, in a closed area."

İnce claimed that he will change the party charter and bring intra-party democracy to the CHP. "If I win the race, my first job will be to change the party charter. I will remove the limitations in the charter." İnce pointed out that the administration cannot have responsibility after election defeats. "Local or general elections, it does not matter, a leader who could not win in his first two elections will be obliged to resign in the party charter that I promised to prepare." He also said that he has a strong belief in his chances. "I believe that I can win because party members are in misery. I will not step back from now on, but this is an election, if I lose, I will be at the service of my party."

Speaking to journalists at Istanbul airport, Kılıçdaroğlu's first reaction to İnce's candidacy was: "Good,very good indeed." Last week İnce criticized the CHP administration, specifically Kılıçdaroğlu, since the opposition parties' joint candidate Ekmeleddin İhsanoğlu lost the presidential election. İnce talked about the CHP's failure and shared concerns about the CHP's future. "In that point, Turkey's established power, the CHP, is being dispersed by the agenda defined by the AK Party. I could make these statements to my party's administrative bodies, but I do not think that it would be helpful. Decisionmaking bodies [within the CHP] lost their functions."

Meanwhile, Mustafa Sarıgül, former district mayor of Şişli, is seen as one of the influential actors in the chairmanship race within the party. Sarıgül showed his support for the current leader Kılıçdaroğlu. He said that he will back Kılıçdaroğlu in the extraordinary party congress, which will be held on Sept. 5 in Ankara. "Kılıçdaroğlu is the consolidative power of the CHP," Sarıgül said. Circles close to the CHP said that Sarıgül aims to strengthen his place within the party for the upcoming terms and to vindicate his 2005 resignation from the CHP.
Last Update: Aug 19, 2014 12:00 pm
RELATED TOPICS