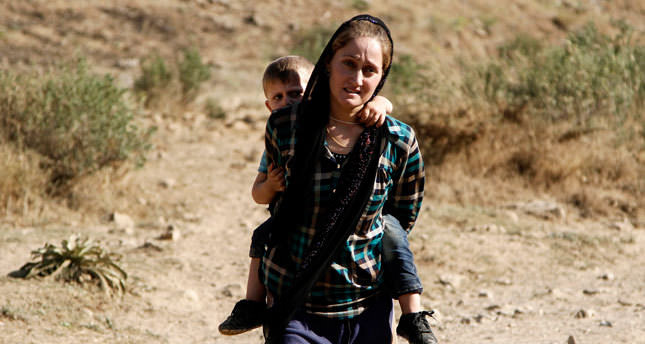 Iraq's Yazidi community, fleeing the brutal takeover of their towns and villages by Islamic State of Iraq and al- Sham (ISIS), heads to Turkey, which offers them shelter, while Zakho in northern Iraq hosts masses of Yazidis waiting to cross into Turkey

Violent attacks of ISIS, including reported killings of Yazidis refusing to convert, displaced thousands of people in Sinjar, a predominantly Yazidi town in Iraq's Mosul and its vicinity. About 2,500 Yazidis took refuge in Turkey, the nearest safe country that pursues an open-door policy for the displaced, be them from Iraq or Syria. The latest batch of Yazidis arrived on Sunday in a tent camp in the southeastern Turkish province of Mardin.

The number of Yazidis who took shelter there alone is around 1,750. Yazidis braved a difficult journey to reach the relatively safer northern parts of Iraq. Many died of thirst and starvation although casualties declined after international rescue efforts to airlift those stranded in the mountainous regions of northern Iraq.

Zakho, a district of Iraq's Dohuk province controlled by the Kurdistan Regional Government (KRG), has become a hub for Yazidis fleeing ISIS. They took shelter in any empty space they could find, from abandoned buildings to schools and parks, in the buffer zone separating Iraq's border crossing from Turkey's Habur crossing. Under unhygienic conditions that might lead to outbreaks of deadly diseases and temperatures reaching 50 degrees Celsius, they desperately wait to cross into Turkey through the busy border crossing. Relating their suffering, some say they have had to leave their families and relatives behind.

Those left behind are either killed by ISIS or held in captivity, they claim. Bereket Veddo, one of the displaced Yazidis, says ISIS particularly targeted Yazidis and what they've done to the Yazidi community is "inhumane." Veddo says ISIS burned down their houses and displaced them along with Turkmens and Kurds in the region. Xeyri Saydi said ISIS militants captured Yazidi women and raped them. "We live here in unhealthy conditions. Tens of people have to stay in small rooms. We don't have clean water and the weather is too hot. Children are especially exposed to diseases here," Saydi said. He said Turkey would be a better place for them to stay and they were looking forward to cross into Turkey soon.

Most Yazidis do not have passports required to travel to Turkey but they are admitted into the country gradually while Turkish authorities struggle to set up tent camps and accommodation facilities in the face of a stream of displaced Yazidis. The Turkish province of Şırnak where the Habur border crossing is located, has been the first destination for fleeing Yazidis. Over 1,000 Yazidis were accommodated in two districts of Şırnak, in unused buildings allocated by local authorities. A smaller number of Yazidis settled in nearby Turkish provinces, in temporary tent camps.

Omer Hesen, 63, stays in a tent camp set up by the Turkish Prime Ministry's Presidency of Disaster and Emergency Management (AFAD) in Midyat, a southeastern town on the border. He and others drove away from Sinjar after ISIS attacks. They first entered Syria and returned to Iraq after a while, arriving in Zakho. He said they walked for six hours to reach Turkey where they were "warmly" welcomed. He spent a night at a school in Şırnak and was accompanied to Midyat. "I thank Turkey. They helped us and saved us from ISIS. We feel safe here. We have everything we need here," he says.

Along with Turkey, Yazidis also received help from one of their own. Staffan Hasan, an Iraqi Yazidi doctor living in Switzerland, traveled to Turkey to help fellow Yazidis. He volunteered for health services for Yazidis staying in Şırnak's Silopi district. His family originating from Sinjar. Hasan immediately flew to Turkey upon hearing the drama of fellow community members. "Most people fell ill while traveling to Turkey. Doctors and nurses at the hospital in Silopi conducted their medical checks. Besides diseases, they suffered mental trauma. Sometimes, it is better for them to have someone they can talk to. I appreciate the aid Turkey provided to those people. Yazidis were not embraced in their own country but Turks viewed them as their brothers and sisters," Hasan said.

Some Yazidis taking shelter in Turkey hope to receive asylum in European countries where their relatives live while others prefer staying in Turkey until the conflict in Iraq ends.

Challenged by an influx of Yazidis and other displaced communities from Iraq, Turkey has strived to address the humanitarian needs of the displaced. AFAD has set up tent camps for Yazidis staying in Zakho in a move to decrease the influx of displaced. Three camps will be allocated for Yazidis and displaced Turkmens in Zakho. Turkey also delivered more than 100 trucks loaded with humanitarian aid, ranging from food to tents, medicine and clothes to Iraq so far.
Last Update: Aug 19, 2014 12:06 pm
RELATED TOPICS