Deputy PM: A new phase is about to begin in the reconciliation process between Ankara and the Kurds 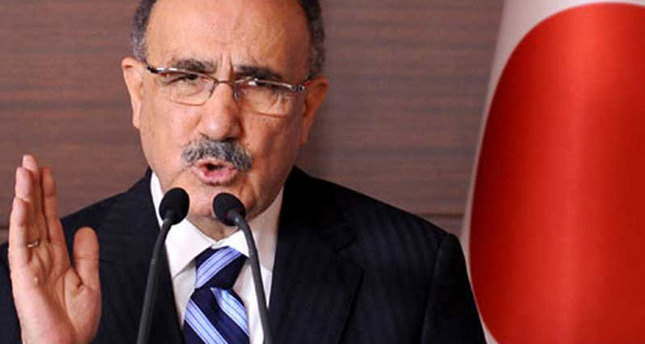 by Daily Sabah Aug 20, 2014 12:00 am
Turkish Deputy Prime Minister Beşir Atalay said that a new phase in the reconciliation process - which aims to disarm the PKK that took up arms against the Turkish state in order to carve out a separate state in southeastern Turkey, and end the decades-long conflict in southeast Turkey - is about to begin.

Speaking to Turkish daily Star, Atalay said, "The government intends to complete the roadmap for the process by September. Several legal amendments may be needed. But, the essence of the matter is to end terrorism, ensure the return [of PKK militants], maintain the social integration and participate in politics democratically."

Atalay stated that, not only the Turkish National Intelligence Organization (MİT) and pro-Kurdish Peace and Democracy Party (BDP), but also other organizations and committees such as the Undersecretariat of Public Order and Security may visit İmralı Island where PKK leader Abdullah Öcalan is imprisoned. The committee affiliated to Undersecretariat of Public Order and Security is expected to hold technical talks with the diaspora.

Noting that the reconciliation process will be as transparent as possible, Atalay added that the Council of Ministers may charge governmental institutions or individuals to hold talks on technical issues with Öcalan, and those figures will be under the legal assurance. Atalay said, "We are in the second year of reconciliation process. It went on with a significant efficiency. We took the biggest step in June with the approval of a draft bill.
It was the first time that Turkish Republic enacted such law."

Pointing out that he recently held talks with the BDP committee that visited Öcalan in İmralı, Atalay said that Turkish intelligence head, Hakan Fidan, also visited İmralı last week along with his committee. Atalay further stated that those kinds of talks will intensify in the fall for the process. "The reconciliation process gave hope to everyone [the entire nation]. There is no violence and pressure in Hakkari [the most southeastern city of Turkey]. The process brings hope to the families of children who were kidnapped by the PKK and to the families of those who voluntarily took part in the PKK," said Atalay, adding that BDP supporters also have a positive stance toward the process.

Asserting that the Aug. 10 presidential election is a good example for the reconciliation process, Atalay said that pro-Kurdish People's Democratic Party (HDP) candidate Selahattin Demirtaş, who is a popular political figure among Kurdish citizens, contributed to the process with his discourse and statements in the political sphere.

The deputy prime minister noted that the government's work on a roadmap for the reconciliation process has been continuing, and the roadmap will be shared with the public when it takes its final form.

As it was announced following the approval of the draft bill on the reconciliation process, a possible roadmap that may be put into practice in the upcoming year aims to ensure the return of PKK militants who are in Europe and Northern Iraq.

As the first step, the government aims to ensure the complete disarmament. It is reported that disarmament criteria will be determined in accord with political and legal steps, and the disarmament process will be based on a time schedule. The second step is to prepare a legal infrastructure for militants who will return to Turkey. Several amendments will be stipulated as part of related articles in the Turkish Penal Code.

The next step is for the PKK militants to return, which are more than 5,000. The roadmap says that the militants who are not involved in the crime are expected to return Turkey in one year while those who fled to European countries such as Germany, France and those who settled in Northern Iraq can return to Turkey in two years. Considering the social sensitivity, a different plan is on the table for PKK leaders such as the PKK's number-two man, Murat Karayılan. It is asserted that those PKK leaders may take a post in the Kurdistan Regional Government (KRG).

An office is planned to open in Iraq's Irbil to coordinate the return of the militants, and a committee will also be established to hold talks with Europe's Kurdish diaspora that supports the reconciliation process.

Those who live in PKK camps need to return to Turkey "voluntarily" as they are officially regarded as refugees. Following the return of male PKK militants, the Interior Ministry and Justice Ministry are expected to take several steps to solve the male militants' military service issue. Children who were born in PKK camps, which are under the inspection of the U.N., will have Turkish citizenship. Militants who return will receive support from the Social Aid and Solidarity Support Fund. Committees in Development Agencies will prepare an economic program for those who want to set up their own business, and they will be directed to the southeastern cities of Diyarbakır, Mardin and Batman.

As part of the reconciliation process and the roadmap, scores of campaigns will be held to protect the social support. Nongovernmental organizations and human rights associations will contribute to the process as well. Should it be found necessary, the officials will contact international platforms and experts to assist with the draft bill. Universities across the country will also give support to individuals of the integration
process of those who will return.
Last Update: Aug 20, 2014 2:07 am
RELATED TOPICS