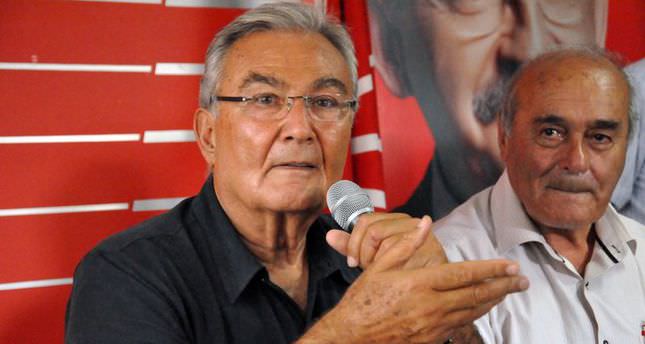 by Daily Sabah Aug 20, 2014 12:00 am
Former Republican People's Party (CHP) leader Deniz Baykal, who left his post after a sex tape scandal, has been consulting with CHP members in secretö in an effort to return to his post in an extraordinary party congress on Sept. 5 and Sept. 6, according to the Sabah newspaper.
The CHP is heading to the extraordinary party congress after the Aug. 10 presidential defeat of the Nationalist Movement Party (MHP) and CHP's joint candidate Ekmeleddin İhsanoğlu, which raised CHP dissidents' voices against CHP leader Kemal Kılıçdaroğlu. Candidates for the chairmanship have started to become clear.

Muharrem İnce, who resigned from his vice presidency post to be a candidate for the CHP chairmanship, announced his candidacy in recent days, but the names of candidates continue to pour in, including Baykal, Turkish Bar Association head Metin Feyzioğlu and Ankara Deputy Emine Ülker Tarhan, who is one of the intra-party opponents.

Last week, Baykal gave the green light for a new party administration amid the rising voices and chaos prevailing in the main opposition party. Baykal said that he wanted to see an "old CHP" protecting party principles and raising its voice against mistaken policies, but still being enthusiastic. Baykal said that the CHP needs to rise to its own feet again and that there should be a conscious debate and negotiations within the party to see the CHP's error in elections.

In an interview in July, Baykal signaled that the CHP's loss in the Aug.10 election was inevitable and criticized İhsanoğlu's candidacy by clarifying his stance concerning the CHP's "risky presidential move." On CHP policies toward the joint candidacy, Baykal said that the president couldn't be elected through cunning.

Criticizing his own party's recent policies, Baykal said that İhsanoğlu was not a suitable candidate for the presidency. Describing İhsanoğlu as a polite gentleman and well-known in international platforms, Baykal said that Turkey needed a joint candidate who could soak up Turkish politics and be able to stand against the mistakes of the ruling party and fight for democracy. He added that it was possible to find a candidate who gives more confidence in terms of his political background.

Clashing over İhsanoğlu's candidacy with Kılıçdaroğlu, Baykal said that an apolitical candidate search for the presidency was unnecessary and what is needed in the country is a president who will stand against foreign politics based on a sectarian approach, assure the superiority of law and raise his voice against corruption.