Germany's spying on Turkey might be linked with Kurdish question 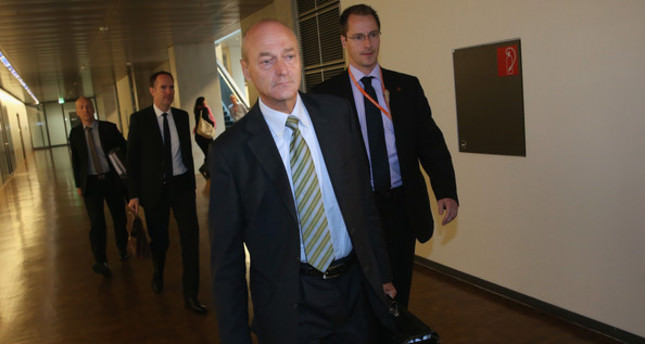 THE GERMAN government's decision to order the Federal Intelligence Service to spy on Turkey in 2009 is tied to the Turkish government's reconciliation process to end PKK's terrorism, experts believe

Political tension between Turkey and Germany has been continuing since the German weekly Der Spiegel revealed that the German Federal Intelligence Service (BND) has been spying on its NATO ally, Turkey, since 2009. Even though German Chancellor Angela Merkel is no stranger to spying since she discovered her cellphone had been tapped by the U.S. National Security Agency (NSA), she refused to comment on the work of BND when questioned about the surveillance of Turkish targets.

While Turkish National Intelligence Organization (MİT) officials are waiting for a detailed explanation from their counterparts in the BND, the main reason behind Germany's eavesdropping has been widely discussed in Ankara. In order to understand why Germany's eavesdropping started in 2009, its worth to remember remarkable events in Turkish politics that occurred at that time.

In April 2009, Hakan Fidan, deputy undersecretary of the Turkish Prime Ministry, was appointed as deputy under-secretary of MİT and a month later Prime Minister Recep Tayyip Erdoğan's senior foreign policy advisor Ahmet Davutoğlu was appointed foreign minister of Turkey. Just after these appointments Turkey's spy agency MİT held talks with jailed leader of the outlawed PKK, Abdullah Öcalan and other PKK leaders, which later came to be known as the Oslo Process, which marked the first instance that Turkey engaged in direct talks with the PKK and Öcalan and the first time in history that the Turkish government launched what it described as a comprehensive approach to ending Turkey's decades-long conflict with its Kurdish citizens. In addition, chairman of the German parliament's committee on internal affairs, Wolfgang Bosbach, said in the German newspaper Frankfurter Allgemeine Zeitung that the activities of the PKK was one of the "good reasons" to spy on Turkey while he was trying to justify the decision.

Furthermore, last January, Deputy Prime Minister Beşir Atalay, who is responsible for the coordination of the ongoing Kurdish reconciliation process, said that there are countries like Germany that try to sabotage the peace process.

Regarding the question of the Kurdish reconciliation process as being the main purpose of Germany's spy activities, former MİT officer and academic Mahir Kaynak, said that Germany does not want to see a Turkey that is a regionally strong actor after solving the Kurdish issue and cooperating closely with the Kurdistan Regional Government (KRG) in Iraq. "Germany is against Turkey's cooperation with Kurds; however I don't think that the reconciliation process is the only reason behind the leak of wiretapping actions. The reconciliation process is one of the most important reason lying behind this, but not the only reason." Kaynak said. According Kaynak the important point that has to be kept in mind is that wiretapping conducted by the BDP was revealed by the German press. "There are two main messages that have been sent with the leak of wiretapping Turkey by German intelligence.

The first message is Germany implicitly threatens Turkey by informing it, Germany is well aware of what Turkey has been conducting. Secondly, Germany might find material that they can use for blackmailing Turkey - they may desire to show Turkey the presence of blackmailing material in that way. The important point that needs to be emphasized is analyzing why Germany informed Turkey that they have been wiretapping them," he said.

Taha Özhan, the president of Turkey's leading think tank SETA Foundation for Political, Economic and Social Research, shares a similar opinion with Kaynak. "In 2009 Hakan Fidan was appointed to MİT and Ahmet Davutoğlu became foreign minister. After these two appointments Turkey put international actors out of action on the Kurdish issue and started implementing its own solution process called 'democratic initiative.' There is no doubt that Turkey's initiative to solve the Kurdish issue may have disturbed some foreign powers." Özhan said.
Last Update: Aug 20, 2014 1:35 pm
RELATED TOPICS